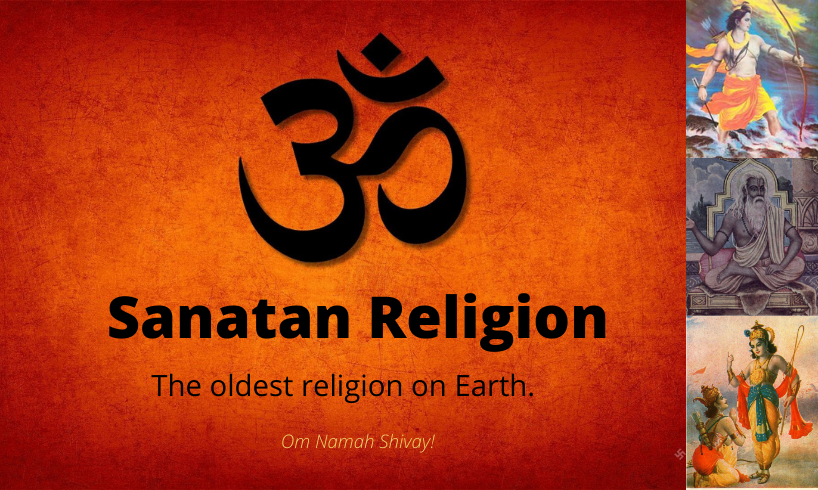 Sanatan is a religion founded between 6,000 years to 8,000 years ago by various prophets (messangers of god) in present-day India and Pakistan while the roots date back to 7280 BC (about 10,000 years back).

There are several prophets which are believed to witness the will of almighty god and they are the ones who built the mighty religion, Sanatan. The very first prophet is unknown or debatable as this religion is extremely old and the evidences could not sustain much. Though, we can say that Lord Ram, Vishvamitra, Vasishtha, Jamadagni, Gautam Maharishi, Atri, Agastya and Parashara (father of Vyasa) are the initial prophets of the religion. The timeline of these prophets is barely possible to assume. Hence, we will believe that that they existed between 6,000 years to 10,000 years ago in their respective time periods.

Around 6227 BC; Prophet Vasishtha was a Preacher and a Scholar who was married to Arundhati. They were later blessed with their son, Sakti. He is credited as the chief author of Mandala 7 of the Rig-Ved.

Maharsi Sakti became a saint in search of god. He married to Adrushyanti. They both were blessed with a son named Parashar who later came out to be a prophet and a saint.

Around 6177 BC; Lord Ram was born in Kosala Kingdom (present-day somewhere in India and Nepal) to King Dasharatha and Queen Kausalya in the royal ruling family of Kosala Kingdom. Since childhood, he was a very intellectual and an intelligent personality. He was trained by professionals which made him quite powerful and smart at the same time.

Around 6152 BC; At the age of 25 or so, he married Sita who was the daughter of King Janak and Queen Maithili, the ruling family of Mithila Kingdom (presently a region shared by India and Nepal).

He was an ideal king who was loved by all. Apart from politics, he was also a preacher who used to preach ang guide the people around him.

Around 6151 BC; He was forced to leave his kingdom by his stepmother, Kaikeyi as she wanted her son, ‘Bharat’ to be the next king (after Dasharath). Lord Ram being a man of integrety and no hatred, peacefully agreed. He left his palace with his wife and his brother, Lakhman.

He with his wife and brother, kept changing his location across various forestlands. He used to live in huts of various sages, priests and so on. He and his companions also used to build their own huts and live at different locations where food was available and climate was good.

Around 6139 BC; During the same time, they met the prestigious Saint and Preacher, ‘Valmiki’ in his ashram located on the bank of Ganga River (located in present-day India). They created a strong bond and Valmiki became a true devotee of Lord Ram.

They spent 14 years of their life like this and one day, his beloved wife Sita was home alone. The King of Lanka (present-day Sri Lanka), Raavan, disguished as a sage, came to her and managed to kidnap her. It is said that he actually flee with her to his kingdom, Lanka. In search of Sita, Ram and his brother toured across the forests but could not find her. While, he heard the news of demise of King of Kishkindha, Vali (also named as Bali).

After a lot of struggle, he found out where Sita was. He immidiately prepared a special army which included hybrids of humans and animals (especially monkeys/gorillas). This army was called, ‘Vaanar Sena’. While, his companion, Lord Hanuman always stood for him as a loyal candidate. It is believed that he was an angel sent by god himself to help Ram.

All of them sucessfully invaded Lanka by crosssing the sea between present-day India and Sri Lanka by putting stones and creating artificial land so that they can walk over it. After the invasion, Lord Ram shot the divine arrow on Raavan and killed him. After this, he returned to his kingdom and took the position of the king.

Around 6138 BC; Valmiki wrote a historical poem named, ‘Ramayan’ which described Lord Ram and his entire story with character sketches.

Around 6,327 BC; Prophet Parashar wrote the the first Puraan named ‘Vishnu Puraan’. He and Satyavati were blessed with a son, Vyasa Dvaipaayana.

Later, Satyavati became the Queen of Kuru Kingdom (present-day somewhere between India and Pakistan) by marrying the King of Kuru Kingdom, Shantanu. They married on Satyawati’s father condition that Shantanu’s eldest son, Bheesma (Ganga gave birth to him) would not inherit the throne of Kuru Kingdom. Rather, Satyavati’s son would get it.

Around 6297 BC; Vyasa Dvaipaayana was born on an island on Yamuna River located in present-day Kalpi, India. Though, the island doesn’t exist now. He is entitled with one more name, ‘Krishna’ as he was born black and ‘Dvaipaayana’ because he was born on an island. He was quite intelligent and stood out of the crowd due to his exceptional abilities of understanding and interpreting. He is the most popular vyasa being very intellectual and oberservant, he was really inspired from the teachings and preachings of the prophets. He took the responsiblity of writing down the sacred scriptures, Veds (including Rig, Yajur, Sam, Atharv), Puraans (includes about 18 sects) and Upanishads. While, he edited the Vishnu Puraan (a sect of Puraans) written by his father. Later, he married to Pinjala (also known as Vatika).

Later, Satyavati’s legitimate sons, Chitrangada died in a war and Vichitravirya died due to illness. Both of these sons died quite early and the throne of Kuru Kingdom went empty for the next king. In response to this, Bheeshma (the eldest son of Shantanu and his first wife) was expected to become the next king as he had a birth-right over it but it was not managed by his step-mother, Satyavati due to her promised condition before marriage. As both of her legitimate sons were dead, she wanted her and Prophet Parashar’s son Vyasa Dvaipaayana and Vichitravirya’s wives to get her a son who could eventually become the next ruler as the crisis of Kuru Kingdom were creating a feeling of insecurity among the citizens. Satyawati wanted her daughter-in-laws to conceive as soon as possible because of Bheesma’s age as he was getting older. If they conceive early, Bheesma would get more time to train the children and the next ruler is appointed as soon as possible. This plan did not please Vyasa Dvaipaayana but he also did not want to go against his mother.

Later, Ambika conceived Dhritarashtra who was born blind. Unfortunately, the authorities did not consider him suitable for the next ruler. While, Ambika’s younger sister, Ambalika conceived Pandu who was born pale. After all this, Ambika and Ambalika did not actually like Vyasa Dvaipaayana due to looks, hence, they used to communicate with him by sending the maid, Vatikā to him. Vatikā was a really generous and caring woman who was never affected by the looks and style of Vyasa Dvaipaayana. With mutual understanding, they both married and were blessed with a son named Vidura. Hence, Vidura was the legitimate son of Vyasa Dvaipaayana.

Around 6247 BC; Dhritarashtra married Gandhari while Pandu married Kunti. Where, Gandhari conceived earlier than Kunti but Kunti gave birth to her son, Yudhisthira earlier. This made Gandhari jealous and insecure which made her abort the fetus. In this response, Vyasa Dvaipaayana turned up and assured Gandhari to fulfill her demand of 100 children.

Vyasa Dvaipaayana did a mircale by dividing the fetus into 100 different pitchers/pots with his profound medical science knowledge and asked Gandhari to open the pots after an year so. It is believed that Ghandari found about 100 babies through the pots. On the other side, Pandu died in a forest after his fifth child was born to Kunti.

After some time, Vyasa Dvaipaayana came to Hastinapur (the capital of Kuru Kingdom) and was amazed to learn that instead of announcing Yudhisthira as the next king, Dhritarashtra was thinking of who will be the next king after Yudhisthira. While his mother, Satyavati was depressed over the death of his grandson, Pandu’s death. This made Vyasa Dvaipaayana very worried and discussed his mother to go with him for meditation as the Kaurav Dynasty (ruling Kuru Kingdom) would destruct soon as they were committing sins and increasing dirty politics. She agreed to come with him and left Hastinapur with her both daughter-in-laws (Ambika and Ambalika) and 5 soms of Ambalika (known as 5 pandavs).

Around 6242 BC; ‘Draupadi Ka Swayamvar’ was an event which took place in Kampilya, Panchala Kingdom (now Kampil, India) where the the daughter of the King of Panchala Kingdom, Draupadi’s future husband was to be chosen through some tests/contests among many aspirants. In this event, Prophet Krishna (another important prophet for Sanatan) was invited as a cheif guest.

Later, Arjun (son of Pandu) winning the contest, along with his four brothers (all of them known as 5 Pandavs) married to Draupadi. This marriage was not accepted by Drupad (the father/king) and Draupadi’s brother, Dhrishtadyumna. Where, Vyasa Dvaipaayana managed the conflict and sorted it out by convincing Draupadi’s family.

After this marriage, the location and presence of the five Pandavs went to Dhritarashtra’s ears. He planned to burn and kill them. Seeing this, Vyasa Dvaipaayana became more sympathic towards Pandavs. While, Vyasa Dvaipaayana was actively involved in the religious ceremonies of Kauravs.

The attacks on Pandavs and fight for the throne was so much hyped up that it was about to result in a massive war and bloodshed.

On November 22, 6242 BC; The massive war called ‘Mahabharat’ took place in Kurukshetra, Kuru Kingdom (now Kurukshetra, India). Prophet Krishna took side of Pandavs in order to bring justice. In this, he neither picked up weapons nor tried to fight with the Kauravs, he rather preferred to drive the horse-cart of Arjun (one of the five Pandavs). During this war, Prophet Krishna preached Arjun and others about the life. He guided and taught them. His teachings were very valuable and one of the important regulations of Sanatan religion.

On December 9, 6242 BC; this massive war ended with the victory of Pandavs. All of the five Pandavs became the ruler of Kuru Kingdom.

Vyasa Dvaipaayana witnessed the war but did not fight as he was against war and a devoted saint. He wrote ‘Mahabaharat’ which includes the complete story of the war. He also wrote ‘Bhagavad Geeta’ based on the teachings dictated by Prophet Krishna.

A hunter named Jara mistakenly shot an arrow on Prophet Krishna while he was sleeping. The messenger of god left his mortal body. This accident took place in Dehotsarg (present-day Bhalka, India). While, the ending story of Vyasa Dvaipaayana is unavailable as it could not be traced or it is quite debatable.

Some Facts about Sanatan Dharm

➼ Shruti: The texts which reflect the words and messages of almighty god. The texts come from Veds and Upanishads.

➼ Smriti: The texts which are developed through human intellect and are the words of humans. The texts come from Bhagavad Geeta, Mahabharat and Ramayan.