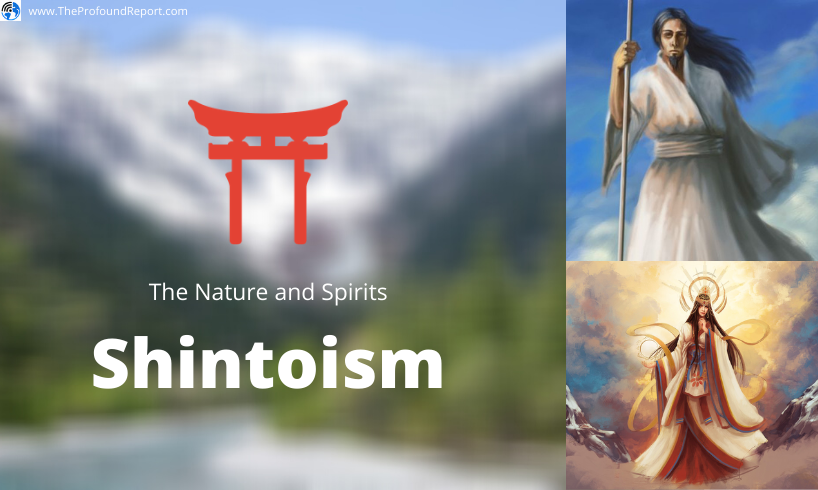 Shintoism is a polytheistic religion founded in present-day Japan. It involves worship of sacred spirits which take the form of things like wind, rain, mountains, trees, river and so on.

The origin of the practices under this religion is unknown and debatable. Though, it can be said that the traditions and practices come from the Ancient times where people honoured sacred spirits that they recognized in nature. Hence, the roots of this religion must be a thousand year or older.

‘Izanagi’ is referred as a creator of the world. His daughter, ‘Amaterasu’ is referred as the sun goddess. According to the believers, they are the descendants of them. Hence, these two are the central figures and considered ‘dieties’.

Around 500 AD; the word ‘Shinto’ was created and all the beliefs and mythology practiced by the people were summed up under one religion named ‘Shintoism’. This was done specially to distunguish Shintoists from Buddhists and Confucianists.

Around 750 AD; The Shinto Scholar, ‘Moto-ori Norinaga’ rediscovered and reevaluated the traditional and religious values. He wrote the book, ‘Kojiki’ which is now considered as a sacred text for the religion. It is to be noted that there might be more previous contributors to this book.

Around 800 AD; The Buddhist monk, Kukai who used to preach and spread the message of ‘Buddhism’ united both the religions, Buddhism and Shintoism with the name of ‘Ryobu Shinto’. In this new form, Buddhism influenced and dominated the practices of Shintoism while many elements from Confucianism were also adopted.

Around the same time, many individuals including rulers converted to Buddhism from Shintoism while some Shinto priests became fortune-tellers and magicians.

After 1701 AD; Many people and important figures came in front to promote and revive Shintoism in its original form. Many believed that uniting Shinotism and Buddhism was not a good idea as it was bringing Shintoism and related traditional practices to an end. Hence, they started to oppose Ryobu Shinto and reestablish ‘Shintoism’.

Around 1740 AD; ‘Shintoism’ was successfully revived to its original form. While, many people reverted back to their religion.

In 1744; The Shinto Shrine, ‘Izumo-Taisha’ located in present-day Izumo, Japan was built. This is the oldest existing Shinto Shrine of the world while it is believed that it was built over the remains of an older Shinto Shrine only.