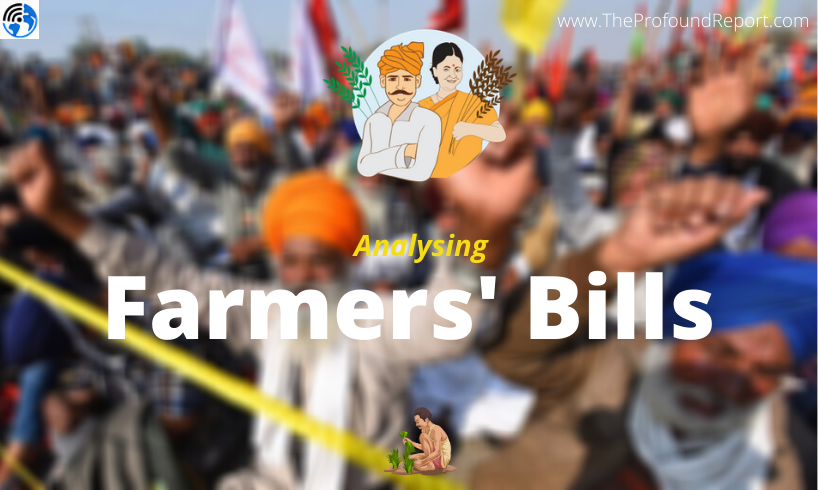 During the pandemic caused by Coronavirus where everyone are advised to stay indoor as much as possible, we see Indian farmers protesting on the roads of Delhi, India and nearby areas of the capital. This looks really shocking and will make everyone of us concerned about the people’s health and the spread of Coronavirus. Anyways, a protest is a always a matter of concern as it shows the suffering of people.

Farmers make up one of the most important sections of humans for mankind as they bless us with food by working day and night in their fields. They struggle a lot in their workplace which requires utmost strength and determiniation. As of 2020, more than 41% of the people in India are employed in the agriculture sector. (Reference: Distribution of Workforce – Statistica). Most of us know that there are plenty of cases where we find Indian farmers not getting the genuine price, struggling with the liabilities and getting exploited. But in the present time, the farmers are feeling so insecure that they have started to protest against the government in ans near the capital city, Delhi.

To know the reasons, we need to understand the concept of APMC and MSP first.

APMC stands for Agriculture Produce Market Committee. It is a marketing board established by different state governments in their states to safeguard the farmers from getting exploited by the individuals or organisations to which they will deal with by selling the farm produce. These committees also ensure that the retail price does not reach excessively high levels. This market involves middlemen.

MSP stands for Minimum Support Price. It is a form of market intervention by the Government of India to insure that that the price of the produce does not fall excessively low and the farmers get at least the minimum price for the produce they selling. It actually fixes the minimum revenue which the farmers will earn over a period of time. While, the government is ready to purchase the produce from farmers more than needed. This extra material is then sold in buffer stocks to distribute the same to the needy and use it at the time any emergency.

On September 14, 2020; Shri Narendra Singh Tomar (under Modi Government) introduced three bills in order to transform the agriculture sector of India in Lok Sabha (Parliament of India). Here are those three bills:

This bill seeks to create an eco-system where farmers and traders will enjoy the freedom of choice relating to sale and purchase of farmers’ produce. They will be allowed to sell their produce anywhere in India. While, APMC may not be dissolved. It is to be noted that no information is given in the bills about MSP and how will it work in future. Though, the government confirmed the people that MSP will be there as it was before. (Reference: MSP in Farm Bills – PBI)

2. The Farmers (Empowerment and Protection) Agreement of Price Assurance and Farm Services Bill, 2020

This bill seeks to provide a national framework that empower and protect the farmers from the individuals or organisations to which they will deal (like big retailers, wholesalers and so on).

This bill removed cereals, pulses, oilseeds, edible oils, onion and patatoes from the list of ‘essential commodities’. This will aim to attract private and foreign investments into the agriculture sector of India.

On September 20, 2020; all of these bills became acts as all of them were passed in the Rajya Sabha (Parliament of India). These bills were passed by the Deputy Chairman, Harivansh Narayan Singh through voice voting system under which the members in favour of these bills were asked to shout ‘aye’ and members who opposed these bills were asked to shout ‘no’. While, the Chairman heard the voice of ‘aye’ louder than ‘no’. The oppositions raised their voice to conduct ‘division voting’. It is really sad to learn that the democracy was ruined and the code of conduct was distrupted as the Deputy Chairman didn’t conduct the division voting and passed these bills in a rush. (Reference: Session 252 of Rajya Sabha, PIB – Bills Passed)

By simply reading the bills, we might think that they are quite good and might shape the agriculture sector of India. The middle-men involved in APMCs would go off and the farmers will get their direct revenue without exploitation. While, it is possible for private companies to offer a much better price to the farmers for their produce.

But, the scenerio could be a way more different when we read the negative sides of it and think from another perspective.

Here are the reasons to oppose the decision: