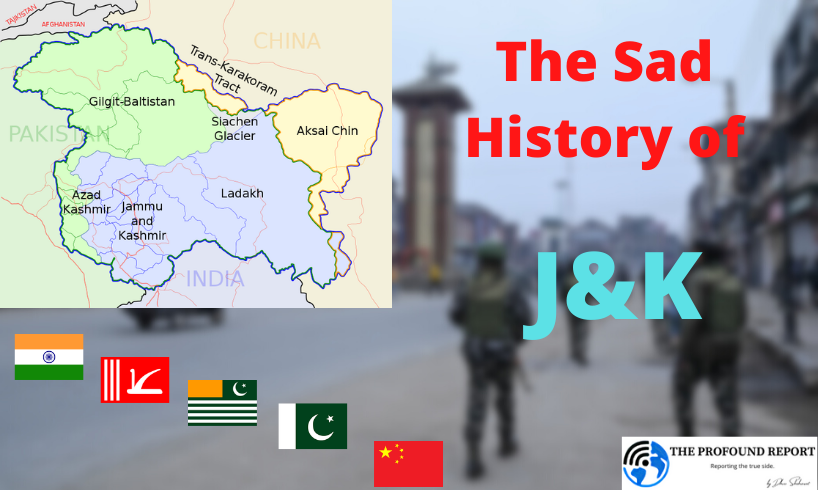 ‘Jammu and Kashmir’ is an union territory of India which is disputed with Pakistan, China and rebels. This dispute is one of the most dangerous and complex disputes of the world. It is ongoing since really long. In this article, we will study and understand the same with respect to the history.

The oldest evidences of neothilic sites and habitation in today’s Kashmir are traced back to 3,000 BC while considering the oldest scriptures of the world under Sanaatan religion, we get to know that it was ruled by Kamboj (an ancient tribe) and later by different dynasties like Kushan Dynasty. This led to the introduction of Sanaatan religion (Hinduism).

From 304 BC to 232 BC; Today’s Jammu & Kashmir was ruled by Maurya Empire under King Ashok. During this period, Buddhism was introduced.

Fast-forwarding the history to Islamic period,

From 1339 to 1819; Different dynasties like Shah Mir Dynasty, Mughal Dynasty, Durrani Dynasty etc. ruled the region while Islam was introduced. It is reported that high rate of corruption and dirty politics was present. Also, Kashmiri non-Muslims were persecuted badly. The non-Muslims were even discriminated and didn’t get chance to participate in politics and demand equity. The Hindu and Buddhist places of worship were regularly attacked and destroyed. The population of Hindus decreased due to high rate of migration and crime.

From 1820 to 1846; Sikh Dynasty defeated the Durrani Dynasty and the region came under Sikh Empire ruled by King Ranjit Singh. During this period, Sikhism was introduced and persecution was opposed.

During this period, conflicts among the Sikh Dynasty arised to a big level which was fueled by British Government. In 1846, Gulab Singh who was a Hindu by religion (once a part of Sikh Empire) founded his own dynasty known as ‘Dogra Dynasty’.

From 1847 to 1947; Second Anglo-Sikh War broke out between 1848 to 1849. British Army again won and announced the ‘Jammu & Kashmir’ as a princely estate (a separate state but a subsidiary alliance of British Rule). After this, British Government agreed over Gulab Singh (under Dogra Dynasty) becoming the King of this princely estate. In 1857, the son of Gulab Singh, Mr. Ranbir Singh became the next king followed by King Ranbir’s son, King Pratap Singh in 1885. Finally, King Hari Singh (son of Pratap Singh and great-grandson of Gulab Singh) became the king of Dogra Empire (ruling J&K). It is to be noted that Jammu and Kashmir was a Muslim-majority region since 1600s while the king was a Hindu. The Kashmiri Muslims were often discriminated and the state administration was dominated by Kashmiri Hindus (most of them were Brahmins). Also, Muslims remained economically and socially backward.

Since 1931; The political activists like Sheikh Abdulla and various other supporters were protesting against the rule of Hari Singh because they wanted to abolish monarchy and bring democracy. Also, Muslims were discriminated under the rule. It is to be noted that Indian National Congress (INC) from India supported Sheikh Abdulla.

In 1947; Two new countries took birth, ‘Republic of India’ and ‘Republic of Pakistan’ as the natives of these regions gained freedom from British Rule. This made a huge impact on the condition and future of Jammu & Kashmir. King Hari Singh was readily motivated to make ‘Jammu & Kashmir’ an independent state neither being part of India nor Pakistan. Moreover, J&K Government and Pakistani Government signed ‘Standstill Agreement’ under which J&K would neither join India nor Pakistan and maintain the foreign relations (trade, transport etc.) functioning among the countries.

Groups of rebels from Poonch and Kabayali (a terrorist group) uprised against the rule of Hari Singh attacking the J&K Government. This incident is known as ‘1947 Poonch Rebellion’. This led to disturbance in the country and government resulting in communal violences and riots. It is reported that violence took place against Muslims of Jammu area which led many Muslims flee to Pakistan as refugees. These rebel groups were fueled by Pakistan as Sardar Ibrahim Khan (the leader of these rebel groups) escaped to Lahore, Pakistan persuading the Pakistani authorities. On October 22, Pakistan trained some fighters from Pashtun to attack J&K. These fighters were provided with all essentials including arms.

The first India-Pakistan war took place in 1947 where India won the war.

In the response of these frequent attacks from Pakistan, King Hari Singh asked Indian Government for military support against Pakistan while India helped eagerly with the condition of acceding in liue of military support. J&K Government under King Hari Singh signed ‘Instrument of Accession’ on October 26, 1947 while this was not recognised by Pakistani Government while this instrument was legally valid as per the rules of independence from British Government. Sheikh Abdulla and other political activists appreciated this instrument and readily joined India.

Indian Government deployed Indian Army as soon as J&K became an Indian state to defend the region from Pakistan.

From Oct 22, 1947 to Jan 5, 1949; ‘Indo-Pakistani War of 1947–1948’ took place between India and Pakistan over Jammu & Kashmir. Pakistani Government unethically and illegally kept encroaching the Indian land and wanted to conquer the entire state while India was defending this. The war ended on January 5, 1949 resulting in victory of India but Pakistan successfully conquered significant part of J&K and named in ‘Azad Kashmir’. Apart from this, even China was after Kashmir and kept on playing strategies to acquire.

India and Pakistan went to United Nations (UN) to resolve this conflict. In response to this, UN made a separate commission known as ‘Commission for India and Pakistan (UNCIP)’ to resolve this issue where UN was in favour of India where it asked Pakistan to withdraw Pakistani Army and rebels from the region and asked India to minimise the presence of Indian Army. UN also asked to conduct a plebiscite (voting to know what people want) after the Pakistan withdraws its army. Unfortunately, Pakistan is suffering from dirty politics where Pakistan has not withdrawn Pakistani Army and terrorists from J&K till date (2021). UN drew two temparory lines to divide J&K. These are known as ‘Line of Control (LOC)’ and ‘Line of Actual Control (LAC)’ which resulted in three divisions, IOK (Indian Occupied Kashmir), POK (Pakistan Occupied Kashmir) and COK (China Occupied Kashmir).

In 1963; Pakistan gifted significant portion of the POK (Shaksgam Valley) to China to gain support from China.

In 1965; Operation Gibraltar (a military operation) was planned and executed by Pakistani Army in-order to cross LOC. This resulted in another massive war between India and Pakistan where India won the war.

In 1971; ‘Ind-Pak War of 1971’ and ‘Bangladesh Liberation War’ erupted where India helped Bangladesh gain freedom and guarded J&K. In the end, India won the battle gloriously and Bangladesh was created.

In 1972; An agreement was signed in Shimla, India where UN asked India and Pakistan to sort this conflict on their own and not involve any other country or party in-between.

In 1974; Sheikh Abulla became the CM of J&K again under Indira-Sheikh-Accords where Sheikh Abulla demanded plebiscite but India rejected the same claiming that it was not possible at that time and ground reality is too different.

In 1984; Indian Army took over Siachen Glacier. This region was not controlled by any of the country as it is really remote and weather is very harsh.

In 1987; Assembly elections took place in J&K. It was reported that dirty politics was played by NC and INC to come to power where the election results were scammed and manipulated. This resulted in heavy protests, strikes and violence across the Indian state. Amid this political unrest, Pakistan took the advantage establishing two separatist groups, Jammu Kashmir Liberation Front and Hizbul Mujahideen whose motive was to join Kashmir with Pakistan.

In 1990s; Riots and violent protests erupted across the region where many locals were brainwashed against the Indian Government. The Pakistani Government was praised and rumours were spreaded. Religious intolerance was increased and radicalization of Islam was started. The terrorist groups targeted youngsters from J&K and Afghanistan who werebrainwashed and tempted by funds.

In January, Kabayalis and various terrorist groups along with brainwashed criminals fueled by Pakistan came into violent attacks. Threats were given to Hindus and Sikhs and were asked to leave their homes. ‘The Exodus of Kashmiri Hindus’ took place which was a violent anti-Hindu movement where hundreds of Kashmiri Hindus were killed and lakhs of them fled their homeland becoming refugee in their own country. A lot of Kashmiri Hindu women were assaulted too. Indian Government deployed heavy militancy to control the situation.

Since 1990s; Pakistan is blamed for training and funding terrorist groups who attack India. Many terrorists are sent to India crossing the borders illegally.

In 1999; Pakistan unethically crossed LOC and captured Kargil District. In this response, India took over Kargil District by pushing away the Pakistani Army and terrorists. Hence, India won and Pakistan has never won a war against India.

On August 5, 2019; India revoked ‘Article 370’ which was a legal step while Pakistan didn’t like this and went against India. Many J&K residents don’t support this too.