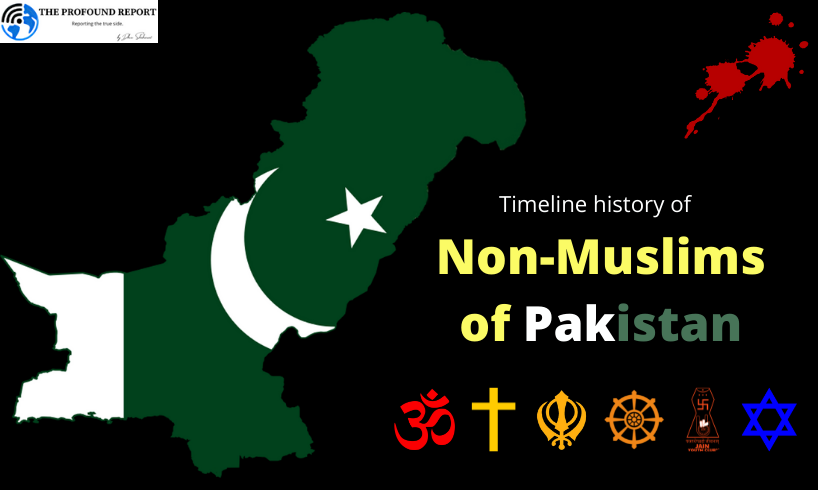 Pakistan, officially called, ‘Islamic Republic of Pakistan’ is a country located in South Asia having fith-largest share of world population. This country is popular for historical remains, religious sites, lakes, monuments, food and so on.

Apart from all of this, unfortunately Pakistan is also known for terrorism, unethical occupasions, persecution, inequality and high crime rate. This dark side makes everyone sad and is a big mark over Pakistan which makes the outside world more judgemental. The biggest threat to Pakistan is the continuous persecution and discrimination against Pakistani minorities. Here is the timeline:

The land which we call ‘Pakistan’ now has been inhabitated by humans since very first as we find evidences of one of the world’s oldest civilizations. Fast-forwarding to the late medivial history:

Before 1526; Various dynasties were present where Hindus were in majority followed by other religious communities.

During 1500s; A new religion called Sikhism was formed by Guru Nanak Dev-Ji and many people converted to the same. The population of Sikhs kept growing.

After 1526; Mughal Empire conquered the land where events of dirty politics, fascism and encroachment were at its peak. All of this resulted in brutal persecution and discrimination against non-Muslims and Islam was spreaded by the government forcibly and unethically. Mass forced conversions were seen and many fled to other empires as refugees. This ultimately led to decline of non-Muslim population as they escaped to other regions, got forcibly converted and many even killed. Though, few people converted by choice amid political benefits and beliefs where Sufism played a big role.

After 1700s, Mughal Empire lost the land to dynasties like Marathas leading to formation of Maratha Empire. The population of Hindus and other religious groups started florishing again while non-Hindus were not persecuted.

By 1799; Various empires like Sikh Empire, Rajput Empire, Khanate of Kalat, Maratha Empire, Durrani Empire and so on were ruling the different parts of today’s Pakistan. During this period, Hindus grew while Sikhs were in majority in Sikh Empire.

From 1857; All of the empires lost the battle from British Empire making the country, ‘British India’. During this time, all religions suffered from forced conversion (to Christianity) from British Government and faced percecution. Widespread discrimination and hatred was at peak making the natives slaves in their own homeland. British India was so huge that many people used to migrate for work opportunities and different lifestyle. Riots and conflicts between religious groups became common as all of it was fueled by British Government (divide and rule technique). Many people (especially non-Muslims) migrated amid discrimination, poverty, crime and hatred.

According to a survey by British Government, the land of today’s Pakistan had about 5% to 40% Hindus during 1909. This data is not at all accurate as the range is quite big. Though, we can take average of 23% Hindus followed by other religions.

During 1931; Hindu population felt to 15% while percentages of other religions (except Muslims) too. This was due to work opportunities, economic benefits, families, discrimination, lifestyle and so on.

Before 1947; Some unofficial sources claim that Hindu population in today’s Pakistan was about 15% while other religions were 5% which means 20% of non-Muslims.

On August 1947; many people were forced to migrate when the announcement of Pakistan was made. The crime rate drastically increased as the cases of murders, loots, assaults, blasphamy etc. were increasing. Riots became common and everyone were fighting in the name of religion and politics. We cannot forget the last domestic trains between present-day India and Pakistan full of dead bodies. Many lost their families and land with immense bloodshed.

After August 1947; British Government successfully destroyed the lands and left. Two nations, Pakistan and India were created. Even after the independence, riots and intolerance was common in Pakistan and India. While, it was much higher in Pakistan than India. Unofficial percentage of non-Muslims estimates that 10% of the population was non-Muslim in 1947 after the partition. Cases of heavy riots, forced conversions, assaults, forced marriages, destruction of non-Muslim place of worships etc. were recorded.

In 1951; First official Census was conducted in Pakistan which reflected that approximately 3.51% of the population were non-Muslims. (Source: Pakistani Census 1951)

In 1956; Pakistan became an Islamic Republic deleting secularism and snatching rights of Pakistani non-Muslims. It is really sad to know that Pakistanis lost their rights on their own land.

We can see that that the population fell to 3.51% from roughly 10% which is huge. Also, West Pakistan territory had about 22.05% of non-Muslims (which included Hindus, Christians, Sikhs etc.) while It is understood that all of them could not migrate to India and significant share of population was wiped out by extremists in Pakistan.

Hence, since the formation of Pakistan, the population of non-Muslims is declining to a strong extent and after the deletion of secularism, the rights are taken away.