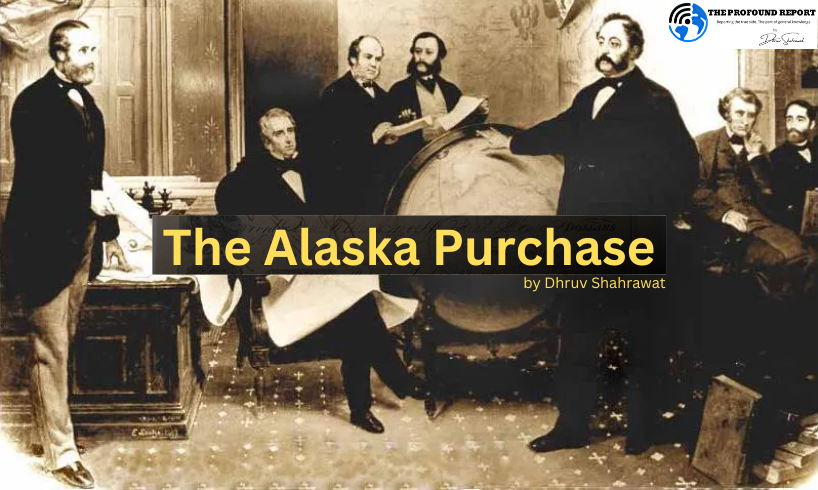 Alaska is an US state located in the northwest region of North America. It is bordered by Canada through land and with Russia through maritime boundary. It is the largest American state having a size of roughly 1.723 million square kilometers. According to US Census Bureau, it has a population of 736,081 individuals as of 2020. An interesting historical fact about this state is that it was a part of Russian Empire before ‘The Alaska Purchase’ where this region was sold by Russian Empire to United States of America in 1867. We will study about this same event along with the fundamental past events of Alaska in form historical timeline.

The oldest trace of human settlements in Alaska is found out to be by various indigenous groups based on the archeological surveys. These indigenous groups included Tlingit, Haida, Aleuts and so on. Fast forwarding to the Russian period;

In 1741, the Russian Monarch, Tsar Peter dispatched the Russian Naval Officer, Vitus Bering to explore the coastline in the far-east of Russian Empire to search for land resource. This expedition was failed but his second try over it was successful when he finally discovered Alaska. This came out to be a great news for the Russian Empire as it was expecting more land to acquire and could find various other resources especially fur bearing mammals and fishes. This land had political significance too through which they could enter Americas (two continents) competing with other European empires (like British, Spanish, Portuguese etc.) to occupy lands in Americas as the European empires were already ruling various parts.

As soon as the Russian Empire started explorations and settlements in Alaska, it was not appreciated by the native Alaskans which included various indigenous groups (predominated by Aleuts) because Russians would use their power and modernity over Aleuts to dominate their land exploiting them and the Alaskan resources. Unfortunately, Aleuts were not well-equipped to fight back or modernized enough to make deals. Various clashes were seen.

Between 1763 to 1964, the conflict between Russians and Aleuts escalated to larger extents when Russian Empire traders raided Aleut villages. The clash killed many and destructed Russian vessels, but Aleut people lost to Russians.

In 1804, the last major armed conflict between Russians and Alaskans called, ‘Battle of Sitka’ took place resulting in Russian victory.

With the victory and annexing Alaska completely, Russian Empire realized that it was not an easy job for the empire to manage and rule this region because of the following main issues:

After 1850, many Russian theorists and political decision-makers feared that US would grow stronger recovering from its civil war and might think of attacking Russian Empire to capture Alaska in condition when Russian Empire is facing heavy losses due to wars and businesses. This would be a disaster for the Russian Empire because they were already busy with Europeans, and they were not well-prepared for wars from the East. Considering another fact that Russian Empire was not able to manage Alaska well, the ministers decided to sell the entire region to some other country. During that period, Canada didn’t exist as a country, so it was not an option for them to sell it to them while the British Empire was the Russian Empire’s one of the greatest geopolitical threats. The most suitable option they found was USA as it was also an ally.

On March 11, 1867, The Russian Diplomat, Eduard Stoeckl started negotiating with the US Secretary of State, William Seward for Alaska. On Ma

On March 29, 1867, the talks went to the conclusion with the treaty ceding Alaska from Russian Empire to US in return of $7.2 Million (USD) that means 2 cents (USD) for each acre.

This deal came out to be very cheap and beneficial for USA and a big gamble for the Russian Empire. Soon after the Russians left handing over Alaska to US, the Americans discovered abundance of resources there and made Russian Empire in loss. Here is how: