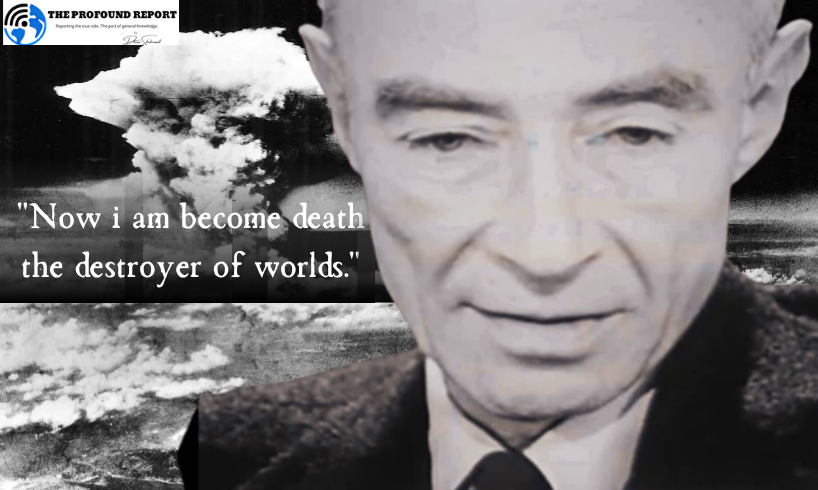 Nuclear weapons are undoubtedly the worst creations by humans. We all must know the fact that United States of America was the first country to develop nuclear atomic bombs and actually use them in the war. After this creation, other countries like Russia, China, France, United Kingdom, Pakistan, India, Israel and North Korea also developed their nuclear weapons with time. While some countries like India were actually forced to develop because of the threats from Pakistan and various other forces. In the history of mankind, atomic bombs have been used about two times and both by USA during World War 2 against Japan Empire. To read about WW2, visit: The Overview of World War 2 – The Profound Report). Humanity would have been better served if nuclear weapons were not invented in the first place and USA didn’t rush to develop them.

J. Robert Oppenheimer was an American Physicist, Scientist and a Professor born in United States in 1904. He is credited for the research and design of the atomic bomb becoming the Inventor of first nuclear weapon in the world while serving as the Director of Manhattan Project (a project dedicated to develop nuclear weapon) under the American Government overseeing the construction of the Los Alamos Laboratory.

On July 16, 1945, the world’s first nuclear explosion occurred as a test at Alamogordo Bombing Range located in New Mexico state of USA under the codename of ‘Trinity’. With his success and new discovery, he is often regarded as “father of the atomic bomb”. Soon after the test and seeing the success, Oppenheimer said the infamous line giving reference to the Sanaatan scripture, Bhagavad Geeta, “Now I am become Death, the destroyer of worlds”.

On August 6, 1945, soon after the testing, USA dropped the atomic bomb named ‘Little Boy’ on Hiroshima city of Japan Empire leading to a horrific event where the entire city was literally wiped out with killing over 140,000 individuals.

On August 9, 1945, another city of Japan Empire called, Nagasaki was also bombed by the American planes dropping the atomic bomb named ‘Fat Man’ which killed more than 64,000 individuals and destructing the city. The people who survived initially also died after some days or months due to the radiations infecting their bodies. The survivors’ descendants are often seen with certain disabilities till date.

In October 1945, it is said that the father of atomic bomb, J. Robert Oppenheimer visited the American President, Harry S. Truman, who allowed the use of the atomic bombs on Japan Empire, for placing international controls over the nuclear weapons but this was immediately rejected by the President. Though, him being actually regretting his actions, getting feeling of “blood on his hands” and actually confronting the President for international control is unsure because this was never documented.

The reference from Bhagavad Geeta

As discussed earlier about J. Robert Oppenheimer saying the quote “Now I am become Death, the destroyer of worlds” giving reference to the Sanaatan scripture, Bhagavad Geeta can be also viewed in the embedded video above. Thanks to Trinity Remembered Organization for the video. The father of atomic bomb whose hands were full of blood of innocent civilians claimed that he found this quote in the Hindu scripture, Bhagavad Geeta. He further says that Vishnu (god) tried to persuade the Prince to do his duty of taking multi-armed form and saying the quote indicating that he should finish the opponents like death does.

This entire quote and explanation is a totally wrong and misinterpreted. The actual quote comes from the Chapter 11, Verse 32 of Bhagavad Geeta which is:

“The Supreme Lord said: I am mighty Time, the source of destruction that comes forth to annihilate the worlds. Even without your participation, the warriors arrayed in the opposing army shall cease to exist.”

This quote clearly mentions “time” as the keyword. The actual philosophical meaning of these lines is that time counts and controls the lifespan of all beings where nothing in this world is immortal except the god with his time. Time eventually takes its toll on everything. Time has the ability to age matter, according to science. Whatever has been created will eventually break down as it ages. The components will still be there, but their current shape won’t exist. Hence, time is the destroyer and not a person. God clearly forbids humans committing war crimes like the killing of innocents.

#Opinion from the Writer: