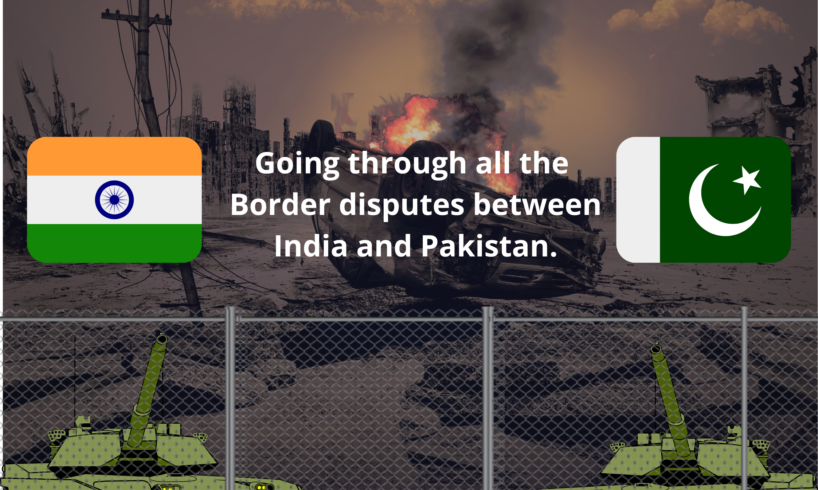 India and Pakistan are two neighbouring countries located in South Asia. Both countries have a lot of similarities whether it be with the languages, religions, cultures/traditions or certain geography. It can be right to say that India-Pakistan makes the deadliest borders in the world with one the most ignited hatred. There are multiple territorial disputes between the two countries, the territories include Kashmir, Sir Creek, Junagadh and Manavadar majorly.

In 1947, a new country emerged out of India. Present-day Pakistan used to be a part of India, but it was forcibly separated by the right-wing extremists propagating the so-called need of a Muslim-majority nation cutting off from non-Muslims in the Indian subcontinent. Major credits go to Mhd. Jinnah who was eager to rule a new country and his right-wing party, All-India Muslim League.

The separation, the border map of Pakistan was made by the British Sir Cyril Radcliffe in just 5 weeks who is credited for ‘having less experience and knowledge’ about the Indian subcontinent. There are many sources that claim the management being so bad that Sir Cyril Radcliffe didn’t even visit the Indian subcontinent before he drew the line, Radcliffe Line which was then adopted as the international border dividing India and Pakistan.

Sir Cyril died in Britain in April 1977, thirty years after the division. After drawing the ‘Radcliffe Line,’ he departed India the next day and never returned.

This is a good example of poor political management and decision-making. Or maybe, this was all strategic.

On August 15, both the countries were made with about hundred thousand of individual losing their lives, a lot of bloodshed, more than 20 million displaced and their land snatched away.

After the independence, ‘Annexation of Junagadh’ took place which made Junagadh and Manavadar a part of India. But this is again not accepted by Pakistan which makes Mhd. Ali Jinnah’s claim that “Hindus and Muslims cannot live together” contradictory where Junagadh and Manavadar were Hindu-majority areas. Since then, Pakistan doesn’t abide with the law and claims it be Pakistani regions.

In August 1947, King Hari Singh, the ruler of Kashmir was certain to declare it an independent country but unexpectedly, it didn’t come out to be an easy job because of the politics and the massive countries, India and Pakistan which were new and unstable. Sardar Vallabhbhai Patel and his team under Indian Government made ties with Kashmir and asked to join India which was initially rejected. There was aggression and heat noticed from the side of Pakistan which made the Kashmir vulnerable considering the weaker military and less population.

In October 1947, Pakistani Government became responsible for attacking Kashmir via the militant/terrorist groups, ‘Kabaayali’ and ‘Lashkar’ causing destruction and causalities. Significant section of Kashmiris (Muslims majorly) were brainwashed and fuelled with hatred making them join or support the gangs of Kabaayalis and adopt right-wing ideologies (either joining Pakistan or making Kashmir an independent right-wing Islamic republic).

On October 26, 1947, King Hari Singh had a meeting with Indian Government over the emergency and security threats in Kashmir asking help from Indian Government. On this day, Former Secretary to the Government of India in the Ministry of the States, Mr. Vappala Pangunni Menon and King Hari Singh signed ‘The Jammu and Kashmir Instrument of Accession’ which is a legal document stating that the entire region of Jammu & Kashmir is an integral part of Republic of India.

From the same day itself, Indian Army mobilised across the entire territory occupying it and terminating the Kabaayali and Lashkar elements.

On April 21, 1948, United Nations Security Council Resolution 47 was adopted after hearing the arguments of India and Pakistan. The Resolution proposed a three-step method for resolving the dispute. In the first phase, Pakistan was urged to evacuate all of its nationals who had entered Kashmir to fight. In the second step, India was instructed to gradually reduce its forces to the bare minimum essential for law and order. The third step required India to pick a plebiscite administrator nominated by the United Nations to conduct a free and impartial plebiscite.

On July 27, 1949, Karachi Agreement was signed between India, Pakistan and United Nations establishing ‘Ceasefire Line’ between defining de-facto border between India and Pakistan across Jammu & Kashmir.

After 1960, Pakistan started claiming another Indian region to be its region. This was Sir Creek River located in Indian state, Gujarat. The main cause of this dispute is the misinterpretation and contradiction in Sindh Government Resolution of 1911 which was done by British Indian Government. According to Paragraph 9 of Sindh Government Resolution of 1911, it is in the favour of Pakistan while Paragraph 10 of Sindh Government Resolution of 1911 is in the favour of India as it follows Thalweg Principle. United Nations (UN) follows the same principle which makes it support India in this matter.Between August 5, 1965 – September 23, 1965, second formal war between India and Pakistan was fought for 1 month 18 to 19 days. This war is known as “Indo-Pakistani War of 1947-1948” or “Second Kashmir War”. One of the main causes of this war was ‘Operation Gibraltar’, which was an operation by Pakistani Army in order to cross Ceasefire Line. The war had expected results where Pakistan lost the battle and couldn’t cross the Ceasefire Line. India declared their victory but it is a strange fact that Pakistan also declared victory.

Between December 3, 1971 – December 16, 1971, Indo-Pakistani War of 1971 broke out lasting for 13 days. This war was caused because of Bangladesh Liberation War (Pakistan’s internal war where East Pakistan region wanted to separate from Pakistan forming their own country, Bangladesh) and Operation Chengiz Khan (was a militaty operation to attack on Indian Airbases such as Amritsar, Ambala, Agra, Awantipur, Bikaner, Halwara, Jodhpur, Jaisalmer, Pathankot, Bhuj, Srinagar and Uttarlai, as well as air defence radars in Amritsar and Faridkot). This was done to divert India from helping Bangladesh Liberation War and encroach Indian land. The results were again in favour of India where Pakistan surrendered to India losing the war and Operation Chengiz Khan was failed. Also, East Pakistan was separated from Pakistan forming a new nation called, ‘Bangladesh’ with the help of India. Till now, India-Bangladesh Relations are quite strong when it comes to diplomacy.

In July 2, 1972, the LOC (Line of Control) went into operation following the conflict between India and Pakistan that began in 1971. They signed the Shimla Agreement, which established what was previously known as the “Ceasefire Line.”

Between May 3, 1999 – July 26, 1999, A war was fought between India and Pakistan for 2 months 3 weeks and 2 days along the ‘Line of Control’ and in Kargil District of India. This war is known as ‘Indo-Pakistani War of 1999’ or ‘The Kargil War’. This causes of this war were again from the Pakistani side. Groups of Pakistani militants were found disturbing Kashmir region with their insurgency. The Indian region, ‘Kargil District’ was encroached by Pakistani militants (later identified as Pakistani Army-Men).

On August 10, 1999, A Pakistani Aircraft was found while intrusion in Indian Airspace in Sir Creek (disputed region). Amid this, Mig21 of Indian Air Force shot it down.

This dispute is caused because of misinterpretation of maritime boundary between the countries.

On August 6, 2019, Indian Government revoked Article 370 and Article 35A. This is often considered as an historical step which was strongly criticised by Pakistani Government and many Pakistanis.

Since 1999, various skirmishes and standoffs are noticed between the two countries. There are examples of many operations conducted by both the government. There are many cases like Pulwama Attack, 26-11 Mumbai Attacks etc. which India faced and Pakistani Government is somewhere blamed for that. Some of these cases are proven and some are still alleged.

On August 4, 2020, Pakistani Government released the political map of Pakistan. This map has created a lot of controversy at an international level. Pakistan claims the entire regions of Sir Creek, Kashmir, Junagadh and Manavadar.