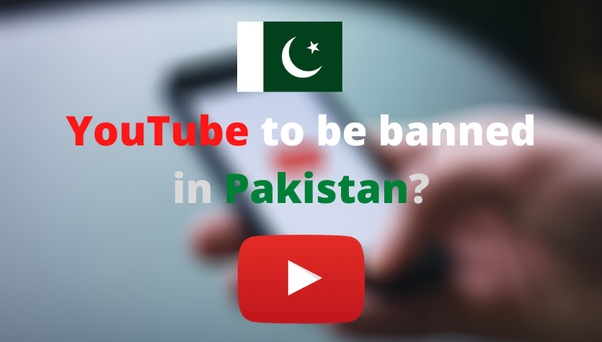 YouTube is an American online video-sharing platform developed by Google Inc. This platform is immensely popular among almost all the internet users, signifying more than 3.5 crores visitors a day! We will find literally every type of video on this platform, whether it be reviews, academic classes, movies, web series, shows and what not! It has generated employment to a large extent around the globe.

In February 2008, Pakistani Telecommunications Authority (PTA) blocked YouTube in Pakistan because of some videos on YouTube which ‘allegedly’ depicted blasphemous statements by the Dutch politician, Geert Wilders which were Islamophobic. The ban was lifted after some days.

In July 2020, ‘Supreme Court of Pakistan’, which is the apex court for the country located in the capital city, Islamabad gave some ‘hints’ to ban YouTube again. This time, the reason comes from the reputed Judge of the court, Justice Amin. He claims that YouTube provides unregulated content to the users, in form of videos as well as comments. He further claimed that YouTube is banned in many countries.

“We have no objection to freedom of expression, remarked Justice Amin. Our salaries are paid from the money of the people, they have the right to raise questions on our decisions and our performance, he said. But the Constitution also grants us the right to privacy”, Justice Amin also said. (Reference: Pakistani report)

Justice Amin is just not right.

We have seen inappropriate content on YouTube multiple times but it is usually removed at some point of time by YouTube’s censorship authorities or by the country or by mass reportings.

On December 11, 2013, Pakistan Telecommunication Authority (PTA) convinced Google Inc. to offer the country a local version of YouTube (www.youtube.com.pk), so that the Pakistani Government can easily regulate the content and supervise the content watched by users in Pakistan.

While, Google Inc. itself is active in censoring objectionable content on YouTube through hired moderators and mass reporting.

This means, the content shown on YouTube Pakistan is purely under the control of Pakistani Government, PTA to be more specific.

What is the response from the world?

In order to stand against this hint, many famous personalities from Pakistan are raising their voices.

YouTubers like Zaid Ali, Azad Chaiwala, Junejo, Sana etc. reacted to this issue and stood against this hint.

We just learned that the content shown on YouTube Pakistan is purely under the control of Pakistani Government.

Banning YouTube is just a part of mere politics and hurting freedom of speech in Pakistan. The objectionable content aired on YouTube should be blocked, not the platform entirely.

We know that the content is in PTA’s hands. It is really illogical to ban YouTube because of objectionable content as it will not actually end such contents from internet available in Pakistan. This is because, there are still crores of websites and portals which provide inappropriate content which is available on YouTube. Moreover, there are still lakhs of adult film websites which are not banned in Pakistan. It is nearly impossible to ban everything on the internet especially highly used platforms like YouTube.

What should be the solution?

In order to stop users watching objectionable content, Pakistani Government can ask PTA to be more serious with their accountability. The content should be monitored and regulated according to the needs.