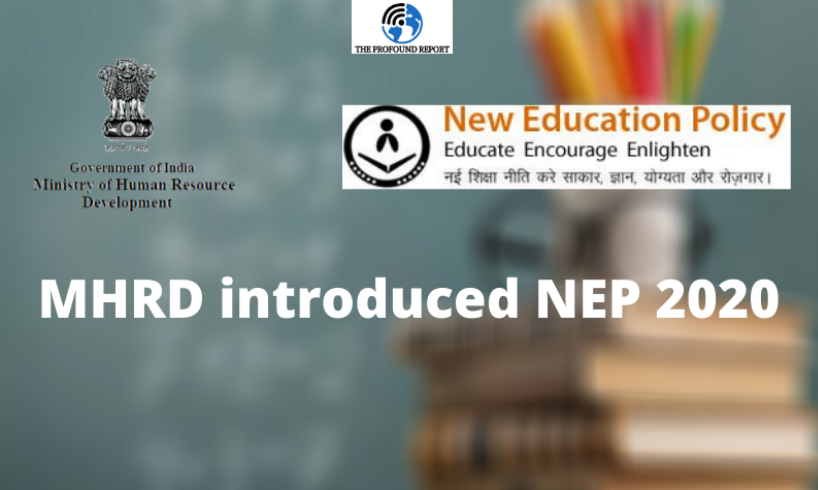 India is a country located in South Asia with the second largest population. This country is known worldwide for the strong army, intelligent minds, inventions and studious population found here. There are various educational boards found in this country, for example, CBSE, ICSC, IB, NIOS and other state boards (like UP Board, Maharashtra Board etc.) Out of this majority of the students study in CBSE Board, followed by state boards.

CBSE (Central Board of Secondary Education) is the biggest education board in India owned by Central Government of India. This board was founded in 1962.

In the education system of India, there were various loopholes and limitations. Students were forced to concentrate on rote learning and there skills were never enhanced to the fullest. Class 10th results and class 12 results of students were the sole decision-makers for their careers.

‘New Education Policy 2020’ is a policy introduced by ‘Ministry of Human Resource Development’ in July 2020 which bring massive changes in the Indian education system.

Here are the changes in schooling:

In the previous policy, students were allowed to choose subjects in class 6, class 9 and class 11. In class 6, they could choose a third language to study (Sanskrit, French, German, Arabic etc.) which they used to study it till class 8. Later in class 9, students got an option to choose any two languages out of the studied earlier where English was compulsory and ‘Foundation of IT’ as an additional subject if they wanted to study. In class 11, students were given four main streams to choose, Medical Science, Non-Medical Science, Commerce and Humanities where all the students were divided and individual choice of subjects was very rigid.

In the new policy, students will get complete freedom to make their own subject combinations and choose any subjects. For example, now students can even study Accountancy and Physics together in their high school. There is no restriction in choice of their subjects.

In the previous policy, students were judged on the basis of their 10 + 2 results (which included results of class 10, class 11 and class 12). While the results of all the previous classes were actually ignored and were not useful.

In the new policy, students will be judged on the basis of their 5 + 3 + 3 + 4 results. This means, now all the classes will have equal importance with each other and result will be declared considering all the standards. In this, 2ⁿᵈ, 5ᵗʰ, 8ᵗʰ and 12ᵗʰ standards will be the major standards.

3. Internships from class 6th itself and vocational trainings

In the previous policy, there were no internships (limited period jobs for students which give salaries/wages) and no vocational trainings.

In the new policy, students will be encouraged to learn and work as interns in various jobs (such as carpenter, gardner, potter, dish skipper and so on). They will be given vocational trainings in their school based on their choice of subjects. This will actually promote these jobs.

4. Coding and programming from class 6th itself

In the previous policy, students used to get opportunity to learn only HTML (a programming language) from class 7 (that to many students didn’t even get this opportunity). While, they were given an option to choose ‘Foundation of IT’ as an additional subject for class 9 and class 10 in which nothing more than HTML was taught. Later in class 11, if students chose ‘Informatics Practices’ or ‘Computer Science’, they got opportunity to study more programming languages (like Java, Python, C++, MySQL, HTML and XML).

In the new policy, students will be taught coding from class 6th itself where they will be taught HTML and additional programming languages like Python and Java.

5. Subjects to be taught in the local/official language at least till class 5 wherever possible

In the previous policy, all subjects (except Hindi) were taught in English in all English-Medium schools. While, the official state language (for example Marathi in Maharashtra) was taught separately.

In the new policy, all subjects will be taught in the official language of the state at least till class 5 wherever possible. For example, subjects to be taught in Malayalam in Kerala.

6. Change in assessment (students and their friends will also contribute in evaluation of their performance)

In the previous policy, report cards were generated based on marks scored by the students and given by the teachers.

In the new policy, report cards will be generated not only based on marks and teachers’ remarks, but also given by friends, classmates, performance in extra-curricular activities, behaviour and internships done. Moreover, students will self-introspect and give some marks to themselves too.

7. Twice a year Board exams

In the previous policy, students used to give Board exam only once in an academic year. While, for students failing in one or two subjects, got an opportunity to give ‘Compartment’ exams which were re-exams. While, students were asked to repeat the class if they failed in more than two subjects.

In the new policy, students will give Board exams twice in an academic year. While, improvement exams will also be organised if needed.

Syllabus will become much easier compared to the syllabus in older policy as:

9. More GDP to be spent on education

In the previous policy, only 3% of the Gross Domestic Product (GDP) was spent on education in India in financial years which was really less as education is one of the key factors of development.

In the new policy, the percentage is increased by 3%. Now, about 6% GDP will be spent on education sector of India. If we compare it with other developed countries, this percentage is really good. For example, 6% in Canada, 6.2% in USA etc.

The curriculum will minimise rote learning and focus on critical thinking, analytical questions and practical based assessment. This will also lead to less chance for students to fail.

In the new policy, ‘credit system’ in the higher education is introduced. This concept is present in many other countries like Canada, USA, Germany, Australia and so on. Under this, each program and course will be assigned certain credits which can be used when changing course or program and it can also be used for comparison.

In the previous policy, if some students used to drop their higher studies before completion for any reasons, they would not get any recognition for completion of certain education which could be used for their career.

4. Reduced time for completion of post-graduation

In the previous policy, Masters in Arts (MA) and Masters in Science (M. Sc.) was for 2 years and students with bachelor degrees could get themselves enrolled in the same.

In the new policy, If students have bachelor degree of 4 years (that is a research degree), then, they can get masters degree in Masters in Arts (MA) and Masters in Science (M. Sc.) within 1 year. While, it will take 2 years for completion if bachelor degree is of 3 years.

5. Permission to 100 foreign colleges to setup in india

In the previous policy, very few foreign colleges/universities were allowed to setup and run in India.

In the new policy, more foreign colleges/universities will open in India. About 100 such institutions are allowed to establish in India.

Fact: This was introduced by INC before but BJP opposed that time. Now, BJP itself is bringing this.

New standards will be set and training will be done on online tools for teachers. This is expected to take place by 2022 enabling more emphasis on e-learning and digitalisation.

All teachers would be required to hold at least a 4 year degree (a research degree or degree + masters) to become a teacher in school.

Is this right? Why?

This is undoubtedly a great step by Indian Government towards Indian education system. This is bringing a lot of positive changes and good deeds.

Here are the positive points:

Does this have any negative impact?

It is good policy but still there are some crucial loopholes. Here are the negative points: