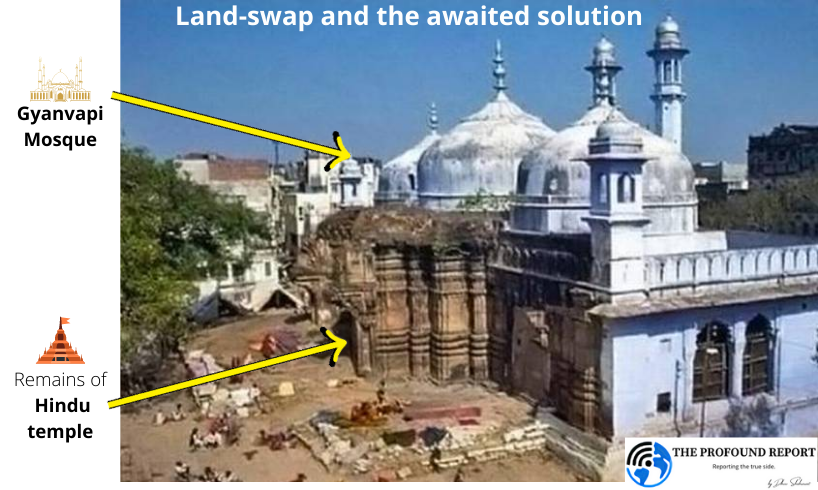 Gyanvapi Mosque-Kashi Viswanath Temple Dispute is one of the really old and popular land and religious dispute in India. In July 2021, both of the places admitted for land-swap for the construction of temple corridor and religious harmony.

To understand the same, we need to study the history of the same:

Before 12th century; The Sanaatan/Hindu temple named as Kashi Vishwanath Temple existed on the same land where Gyanvapi Mosque exists today. The exact information about the year it was established and who built it is actually debatable because of the destroyed history and timebound.

On 1194; The General of Ghurid Empire under King Muhammad Ghori demanded the construction of a mosque named ‘Razia Mosque’ in place of Kashi Vishwanath Temple. This was done to ignite the hatred toward Hindus and Hinduism which could actually serve as a good support system for the dynasty’s dirty politics. Being extremists, multiple attacks on the temple were made and various compounds of the same were destroyed too.

Between 1211 – 1266; Under Delhi Sultanate, the demolished temple was being revonated and rebuilt by the Hindu community living there with the help of a rich Gujarati merchant.

Between 1447 – 1558; The temple was again attacked by extremists under Jaunpur Sultanate (ruled by King Hussain Shah Sharqi).

After 1560; The temple was being reconstructed by King Man Singh (ruler of Jaipur) with King Akbar.

In 1585; The temple was renovated by Raja Todar Mal under Mughal Empire.

In 1669; The temple was brutally attacked and destructed by under Mughal Empire (ruled by King Aurangzeb). It is to be noted that the base and various other parts of the temple survived, a mosque was constructed over it. The mosque is known as ‘Gyanvapi Mosque’. (Source: Kashi, The City Illustrious)

In 1777; Rani Ahalyabai Holkar (a Minister under Maratha Empire) being a religious woman and in order to assist devotees, she ordered construction of a new temple with same name (Kashi Vishwanath Temple). This temple is just beside Gyanvapi Mosque. (Source: Know India Gov.)

Since 1947; when India became an indpendent nation, the demand of historical correction of this temple has been on light. The extremist groups (from Muslim community) have been found cooking fake stories and spreading hatred among the population. It is to be noted that one Imaam working at Gyanvapi Mosque was found teaching different history to the innocent students at the mosque. Many court cases, debates and discussions are made to solve this land/religious dispute. Various riots and clashes were witnessed too.

On July 23, 2021; This historic land/religious dispute finally came upto landswaps. About 1,700 square feet of land of Gyanvapi Mosque is being given to Kashi Vishwanath Temple for building a corridor for the temple. Also, Kashi Vishwanath Temple gave them about 1,000 square feet of land to Gyanvapi Mosque as an exchange (land-swap). This has corrected much of the historical injustice and communal harmony is promoted. Also, the court has asked for historical and archeological research over both the mosque and temple to solve this dispute fully.