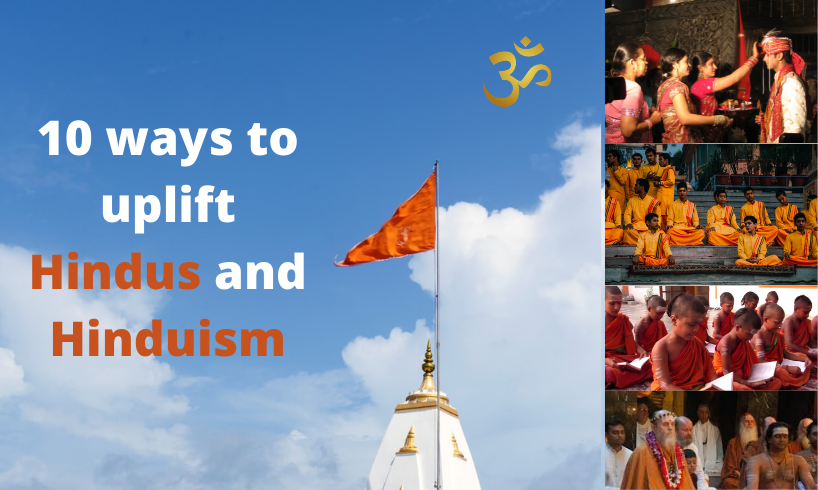 Sanaatan religion (commonly known as Hinduism) is the oldest surviving religion in the world. It originated in present-day India and Pakistan about 8,000 to 10,000 years ago. Despite being one of the most logical and beautiful religion, it is not so much popular in the world like Christianity and Islam. Moreover, many people either don’t know about it or know less as expected. It is really weird to learn that many Hindus themselves have not learnt about their religion.(Learn the history and origin of Sanaatan/Hinduism.)

In this article, we will study some 10 ideas to make Hindus and Hinduism stronger. Also, these points will surely uplift Hindus and promote Hinduism:

An institution to educate candidates is called a school. We find schools (either private or public) which are usually affiliated with certain education boards. Apart from this, there are also some religious schools which teach the candidates both religion and basic education. For example, Christian missionaries, Islamic schools (also called ‘madarsas’ and so on. While, there are very few in India that too not perfectly operated. It was reported that IDF currently has only 246 baal gurukuls (Source: IDF Org.) compared to 24,010 madarsas in India (Source: Ministry of Minority Affairs) where Hindus in India are more than 75% of the population.

Many of us know about the Babri Mosque being reverted to Ram Mandir after the dispute was solved in the court. But there are still some places which were Hindu temples before but now they are converted to non-Hindu religious sites, for example, Eidgah Mosque in Vrindavan, India.

There are certain universities in the world which are inspired from different religions. For example, Jamia Milia Islamia University, Aligarh Muslim University, Madras Christian College and so on. Unfortunately, there are only few Hindu-inspired universities like Banaras Hindu University and Hindu College of DU.

4. Form some committees and boards under Sanaatan/Hinduism

There should be well-established committees and boards where people could become members and make reforms for the development. For example, we have Central Waqf Council for Indian Muslims but sadly we don’t have proper board for Hindus.

India is suffering from widespread discrimination. People often discriminate Hindus based on their caste, gender, culture and community. There should be more specific laws which should take actions against this mindset and practices. Also, campaigns, events and marketing can be done to educate the people that there is no discrimination in Hindus.

Certain people from Hindu community are found indulging in ominous activities, black magic, superstitions and funding pseudo-sages. This should be condemned and stopped as it is obviously not a part of the religion but still the religion’s name is associated with it. Also, there are many mythical stories and claims which disturb the environment.

8. Reservation only for underprivileged

The idea of reservation to all candidates coming from tribal groups, so-called lowercaste communities and minorities was valid during the old times when India was newly formed. But looking at the current scenerio, we can understand that there should be proper background check of the candidates before alloting them reservations (only the people actually discriminated or affected by lack of funds should be given reservations). For example, giving reservation to a highly privileged ‘Dalit’ and not thinking about a poor Brahim is actually weird.

Government of different countries can fund the Hindu historical sites, religious places and pilgrims for their development, marketing and preservation. This will actually boost tourism giving profit to the government and promoting Hinduism. Also, it will be easier for tourists and devotees to access the places.

Museums showcasing the history, historical remains, facts and proofs regarding Sanaatan/Hinduism should be established to promote the religion and make the citizens aware. This is not only a good source of income but also it will educate many.