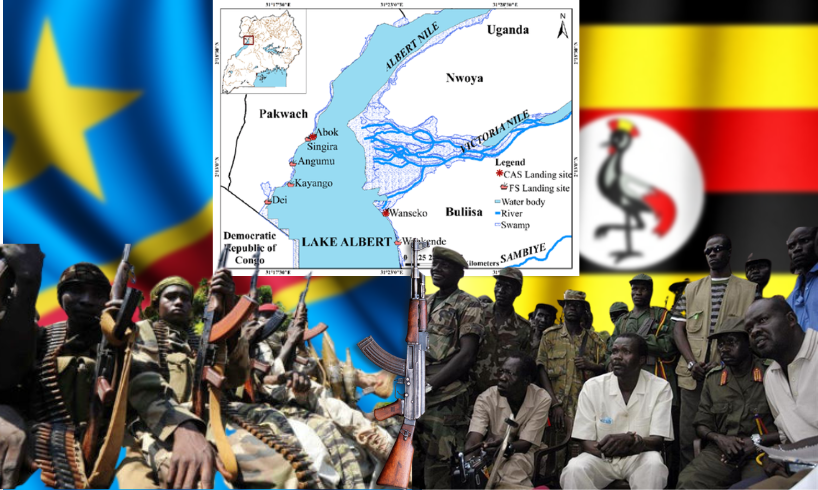 Uganda is a landlocked country located in East Africa. It is known for having diverse cultures, mountain ranges, lakes and rare birds.

Democratic Republic of Congo is the second-largest African country by size. It has abundance of natural wealth such as diamond, copper, cobalt and so on.

Both countries are suffering from war and political instability because of number of active terrorist/militant groups, religious extremism (Islam and Christianity) and the border dispute around and in Lake Albert region.

Between 1390 and 1665, Kongo Empire ruled over today’s Republic of Congo, Democratic Republic of Congo and Angola. This empire was further divided into small territories where ruler of each territory was appointed. The territories were responsible to pay tax to the government (empire) regularly.

Around 1482, The Portuguese Explorer, Diogo Cão, entered Congo River from Atlantic Ocean discovering Kongo Empire and nearby settlements. He came to the African land for political and business affiliations where he could see Portuguese Empire having hold of resources (both human and natural) and political coverage.

On May 3, 1491, to gain control and tangle the state, Diogo Cão had to win trust of Kongo residents. To do this, he misused the religion, Christianity to fulfil his political motive. He made the King of Kongo, Nzinga Nkuwu accept Christianity as his faith over his traditional set of practices. Nzinga Nkuwu was then named as ‘João I’. The religious conversion process continued where many more ruling people and locals were baptized. It is reported that many conversions were even ‘forced’ or ‘blackmailed’.

After 1509, Christianity was forcibly announced as the state religion of Kongo Empire by ‘King Afonso Mvemba a Nzinga’.

From 1601, just like Portuguese, more European powers like Dutch, British and French started coming to Kongo region to exploit Africa. This made a heavy chaos in the region amid different political views and greed.

In 1665, expectedly, Portuguese Empire betrayed and attacked Kongo Empire. After the victory of Portuguese, the authorities beheaded the King of Kongo Empire and placed it in a church.

Amid this, hatred against the local traditions, language and culture were propagated. The right-wing started promoting Christianity brutally.

With time, Kongo Empire came under the rule of Portuguese Empire.

In 1885, Belgian Empire took over Kongo Empire (ruled under Portuguese Empire) where it gave a lot of funds and supporting policies to European invaders in compensation (like free-trade policy to Europeans). This region was now called ‘Congo Free State’ where ironically it was a right-wing rule where freedom was a hoax. Officially, Belgian rule was to offer freedom, but it used the locals for slavery and systematically looted the resources like rubber and animals (specifically elephants for their teeth).

In 1894, Uganda a nation was founded. It was under British Empire.

On June 30, 1960, Democratic Republic of Congo came into existence gaining independence from Belgian rule where ‘Congo Free State’ was dissolved.

Soon after independence, the local militias popped up attacking the people and the government in hope of establishing their favoured government. This led to multiple civil wars.

In 1965, the militant, Mobutu Sese Seko united and formed various militias and attacked his own country destroying the ruling government during that time. He became Ruler (dictator) of the country. He also renamed the country to ‘Zaire’ in between.

In 1972, the cruel dictating President of Uganda, Idi Amin expelled Asians and Asian-origin people out of Uganda. He also persecuted religious minorities like Hindus, Jews, Jains, Sikhs and Buddhists.

In 1995, various militant groups like ‘Allied Democratic Forces (ADF)’ and ‘Lord’s Resistance Army’ were formed to rule over Uganda and expand into Democratic Republic of Congo. A former ADF Fighter claimed that it was made purely for political motives but later the religion, Islam was inserted to form right-wing and play with sentiments. Many more Islamic extremists groups were formed later making the region more problematic. While Lord’s Resistance Army is very similar but just considers itself “Christian”. It is really humorous to learn how ADF and Lord’s Resistance Army been two different religious extremist groups are found to be allies on multiple occasions.

During this phase of the conflict, Ugandan troops were accused of human rights violations against the civilian population. Among the allegations was that they sexually abused local women. The Ugandan army were also accused of stealing the rich natural resources of the Democratic Republic of the Congo.

In 2005, The International Court of Justice ruled that Uganda must pay DR Congo damages for the illegal invasion. The money has yet to be delivered.

In 2006, unbiased elections were held in Democratic Republic of Congo which resulted in bringing of democracy. Though, the new elected President, Joseph Kabila, was not good even where law and order were a hoax.

In May 2008, it is said that Ugandan Forces allegedly entered the land of Democratic Republic of Congo to capture more land where Ugandan Army claims that DRC authorities were trying to gain control of their (Ugandan) regions. The territorial dispute is for the area between the villages of Aru (on the DRC side) and Arua (on the Ugandan side). The military spokesman for Kampala has also accused Congolese authorities of undermining Joint Commission efforts to resolve the border dispute. The area has long been tense, partly because to oil prospecting operations in Lake Albert, which runs along the boundary between the two countries.

In March 2018, another Presidential election took place in DRC where Felix Tshisekedi took over the position.

In July 2018, officials from the Democratic Republic of the Congo (DRC) stated on Monday that 12 fisherman perished and a dozen others went missing on Lake Edward. Over the last week, Ugandan and Congolese forces have exchanged fire at the disputed border lake, leaving 30 people dead or missing.

On May 22, 2022, hundreds of civilians fled into Uganda because of a coordinated operation by DRC Government military and the United Nations peacekeeping agency MONUSCO against M23 insurgents. According to Hillary Onek, Uganda’s Minister for Refugees, the new influx is stressing resources. It is estimated that about 17,000 Congolese refugees have since crossed into Uganda.