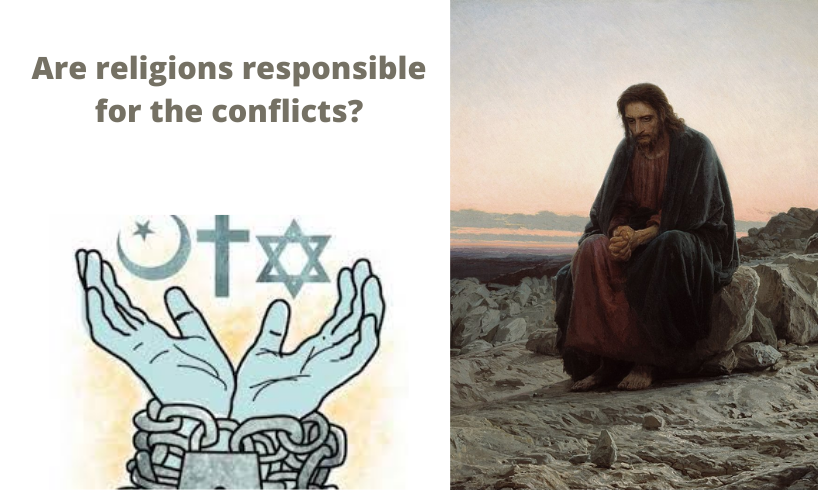 Is Religion the most important reason for all conflicts of the world?

Humans have been developing themselves and their world with lightning speed where we find plenty of great discoveries, inventions and events which amaze us for becoming so beneficial. But certain events leave humanity incomprehensible about humans. We all must have come across the concepts like ‘religion’ and conflicts in the name of it. Oxford Dictionaries defines religion as “the belief in the existence of a god or gods, and the activities that are connected with the worship of them, or in the teachings of a spiritual leader.[1]” With this very basic definition, it is unclouded that religion is nothing more than a belief system towards a particular faith where all human beings cannot agree upon a single faith due to the diverse thinking of the people. There have been enough conflicts around the world since the stone-age but since the early civilizations of humans, ‘religion’ is always used as a tool to spread propaganda and blame everything on religion. I firmly refute the statement, “Religion is the most important reason for all conflicts of the world.” I would rather say that religion is not only the ‘most’ important reason, but it is absolutely not a reason for even a single conflict.

To understand this point of view, we will jump to the history and talk about real-life examples to analyze the proofs. History has a lot of events where religion is blamed. The oldest conflict which can be traced is probably from the Vedic Period or older which is considered history by many and mythology by some, but most of us would agree to the common facts that the empires and the conflicts existed if not by the same name. The number of wars that occurred during this period where the most popular is ‘Mahabharata. This war was fought between Kauravs and Pandavas for the reign of the Kuru Kingdom, both the parties came from the same religion following the common father figure, Ved Vyas’s prophethood, but the dirty politics made them fight to result in killings and destruction. Both the parties took the name of religion and considered this an act of justice as commanded by their religion, but Sanaatan-ism never taught this and was totally against the conflicts over dirty politics which can be easily seen from Lord Krishna’s decision of not fighting in the war, rather preaching the message of God of loving each other. The Yajur-Ved, Shukla 36/17 directs the believers to maintain peace and harmony. Hence, Kauravs simply ‘blamed’ their religion for their desires. Another historical fact can be traced to the Roman Empire spreading across Europe and Middle East. This empire was ruled by right-wing extremists which did not accept Christianity in the beginning and only accepted Judaism. The situation was so cruel that the Former Governor of the Roman Empire, Pontius Pilate gave orders to crucify Jesus Christ. The horrific and largest persecution named ‘The Diocletianic’ also took place killing millions of Christians. The dirty politicians used the name of the religion, Judaism giving an excuse of the same. Judaism never commands to harm innocent beings and teaches to live with peace and harmony. The holy book, Tanakh asks the followers to “Turn away from the evil and do only good, seek peace and pursue it.[2]” as stated in Psalm 34:14, Tanakh. The biggest irony is that this empire didn’t settle with their views, they made Christianity their state religion after 313 AD where they started the persecution of Jews in the Roman Empire where they considered Judaism as the only truth before harming the Christians. It is to be noted that Roman Empire got changes in their views but didn’t change their ideology. The ideology of spreading propaganda, maintaining fear with dictatorship and creating vote-banks. After the introduction of Islam in the 7th century, persecution of Muslims started in empires like Roman Empire and Byzantine Empire as well where they were harmed in all possible ways. Muslims had to form their own political bodies and for justice. Fast forwarding the history, we know about extremist reigns and groups in the name of Islam, for example, Mughal Empire which conquered the Indian subcontinent throwing out a genocide against Hindus, Sikhs and various communities living peacefully. The rulers like Babur claim themselves to be working for Islam and making the land pure with forced conversions. While people like him and terrorist groups like ISIS, Taliban, etc. just care about their malicious dreams and politics where they don’t consider the theory of real Islam which states, “whosever kills a human for other than no reason, it is as if he has killed the all mankind.[3]” in Quran Al-Maidah: 32. Living in a diverse environment is always a blessing. I believe everyone can study this on their level, it is very absolute that everyone would have interacted or met a person of another belief, if they observe, there must have been no or a very few religious intolerances they witnessed among themselves. On the other hand, we find many cases of riots and clashes between religions because infected politics is involved in them. The highest portion of the population doesn’t fight their neighbours or fellows in the name of religion, it is the dirty politics that cause the same. Whenever a case regarding the riots is discussed in the courts or investigated by authorities, the decision clearly comes out to be because of some third parties. For example, the Hindu Genocides of Kashmir during the 1990s were blamed entirely on Muslims living there but after the investigation, it came out to be a politically motivated step where terrorist groups like Kabaayalis and various extremist groups were involved in order to separate the Kashmiri region from India.

Each and every conflict in the world is originated out of dirty politics, propaganda, rumours, lack of knowledge and hatred. Goons, hooligans and dirty politicians are found everywhere and in every religious group but not in any religion. An extremist or a criminal can have any background, whether it be Christian, Muslim, Sanaatani (Hindu), Buddhist, Sikh, Jain, Zoroastrian, Shinto, Atheist, Agnostic or any other. It is now the people’s responsibility and a duty for that matter to gain sufficient knowledge about peace, love and harmony. I would like to end this essay with the famous quote by Jalal Al-Din Rumi, “The lamps are different, but the light is the same.[4]”