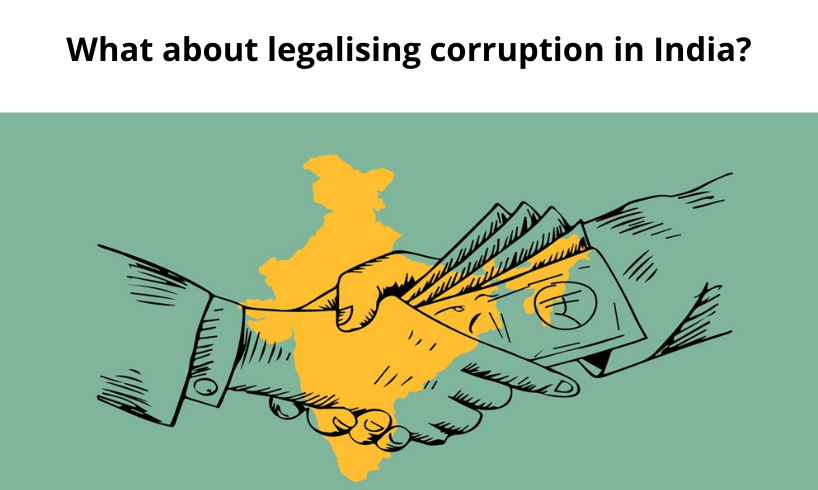 The Czech writer, Milan Kundera, is popular for his exile storey from his own nation and his views on comparing families with countries. From childhood, we are used to calling all the citizens our brothers and sisters in regular school assemblies. It is quite obvious that a country is like a big family where all the citizens play the role as family members. It is crucial to learn that being a part of a family is all about loyalty, honesty, and respect, where “corruption” acts like a slow poison, killing the integrity. Unfortunately, this slow poison is present in every nation, which ultimately harms the economy and administration of countries.

Corruption can be defined as some fraudulent conduct by those in power in the expectation of receiving money or assets from the victims. The basis of this hazardous concept is “bribe,” which is undoubtedly a dreadful disease. Talking specifically about India, the country reported that most of the cases of bribery were to reduce taxes, duties, and bury traffic violation cases. According to ‘The Prevention of Corruption Act, 1988’ from the Indian Constitution, both bribe-givers and takers are to be penalised where bribe-giving is punishable with imprisonment ranging between six months and five years and a suspension of the bribe-takers’ job. No economist or expert has ever supported such ideas. Only in 2011, the famous economist and professor, Dr. Kaushik Basu, discussed “legalizing corruption”, arguing that allowing bribe-givers but not bribe-takers would make bribe-takers more hesitant to accept bribes while bribe-givers would not be penalized. This seems to be a psychological card used when the end motive of demolishing corruption remains the same. It is so hazardous that it reduces public revenue as the funds go to unprincipled officers instead of the government. This ultimately leads to larger fiscal deficits. Corruption also impacts equality as it increases the gap between people and the government, meaning only a certain section of the population enjoys getting their work done at a lower cost and with ease. Bribing is also affecting education and the job sector where students hold college seats and get into various jobs with the help of money in their pockets and not with the help of merit. It is really astounding to know that briberies contribute the most to black money, which ultimately forces the government to mint more currency notes and lack the necessary financial records. According to the International Organization of Scientific Research, if corruption is eliminated from India, the nation’s foreign debt can be paid off and the country can become tax-free for the next 30 years.

India is affected by dirty politics, which is a gift of corruption alone. If corruption is legalised, then it will be taxed too, as it will be a part of the income. Amid this, people will start bribing the authorities to not consider the corruption as corruption. Hence, legalising corruption seems more of a vicious cycle, and we conclude that it will be like shooting ourselves in the feet.