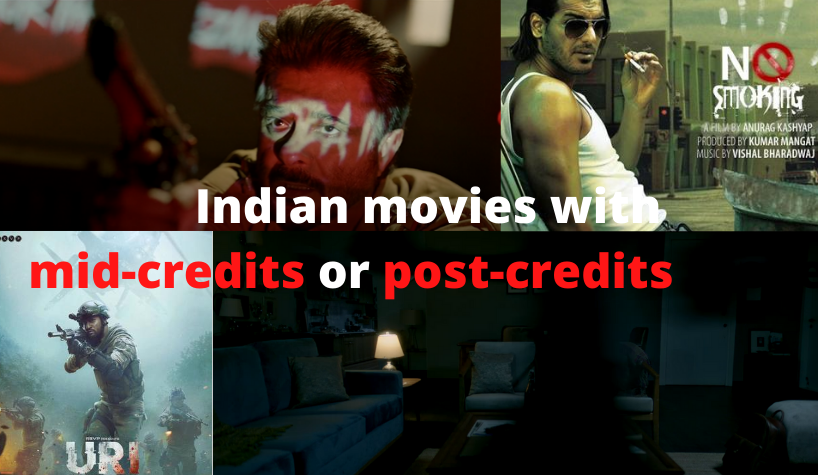 Mid-credit or post-credit scenes are the scenes in a movie which is shown either between the credits or after the credits of the movie while credits are shown in the end.

It is really fascinating and it can actually give clues of the next sequel of the film or the ending of the film. We will witness this quite often in American cinemas, especially in Marvel movies.

It is common that most of the people actually don’t know that such scenes are also their in Indian films!

There are a few Indian movies which come with either mid-credit or post-credit scenes.

Bhoot Part One: The Haunted Ship is a Bollywood film produced by Dharma Productions. This film was released in 2020 which revolves around the story of ghost in a haunted ship.

No Smoking is a Bollywood film produced by Eros Now. This film was released in 2007 which is a story about a chainsmoker who visits a rehabilitation centre to quit smoking where he faces a lot of problems and mental trauma.

Watch this movie on JioCinema

Tamasha is a Bollywood movie produced by Sajid Nadiadwala. This film was released in 2015 which has a story of two Indians who fell in love with each other in Corsica.

Watch this movie on YouTube, Netflix or Google Play

Uri: The Surgical Strike is a Bollywood movie released in 2019, based on a story of Indian Army which attacks the secret terrorist base in Pakistan.

Watch this movie on Zee5

Malang is a Bollywood movie released in February 2020. The story is about a couple who met in rave party in Goa but later they meet with some bad incidents.

Watch this movie on Netflix