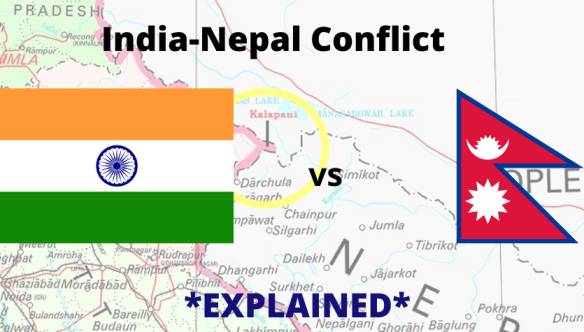 This article will explain the entire ongoing conflict between India and Nepal with all the proofs and sources. In this conflict, there are three countries involved, India, Nepal and China.

India, officially known as ‘India or ‘Bharat’ is the world’s seventh largest country, located in South Asia. The military strength of the country is ranked as number 4 in the world by Global Fire Power.

Nepal, officially known as ‘Federal Democratic Republic of Nepal’ is the world’s 93rd largest country, located in South Asia. The military strength of the country is ranked as number 122 in the world by Global Fire Power.

China, officially known as ‘People’s Republic of China’ is the world’s fourth largest country by land and most populous country in the world. The military strength of the country is ranked as number 3 in the world by Global Fire Power.

There is an ongoing conflict between India and Nepal where China is also involved to some extent.

What is the conflict for?

Which is the disputed area?

This land is located between Nepal’s 7th Province and India’s Uttarakhand state. It has no doubt has a significant size. It is really interesting to know that this land has almost equivalent size to the capital of Uttarakhand which is ‘Dehradun’. Hence, we can understand that the land is not a small piece which can be ignored.

Here is the detailed and clear map of the disputed area:

There is a strong presence of Indian Army and Nepali Army in this area.

According to Census 2011 (India), the population of the different places of this land is:

While population of other places of the land is uncertain or unavailable at the moment.

Roughly we can say that there must be more than 2000 people residing there consider the other places and the increase in the population.

When did this conflict began?

This conflict began in 1800s with the British government ruling India, when Britishers were trying to expand the land of British India towards Gorkha Kingdom (now Nepal).

It was later highlighted in May 2015 when India and China signed a trade route through this land under Modi Government.

Since then, this conflict is going on but it became actually a concern and active when a road linking Mansarovar Yatra (to Kailash Mountain located in China) was inaugurated on May 8, 2020 by the Indian Defence Minister, Mr. Rajnath Singh under Modi’s rule.

What is the history of this area?

To know about the history of this land, we will go back to 1800s when India was called ‘British India’ as it was ruled by the British government and Nepal was called ‘Gorkha Kingdom’.

During this period, The British Army was trying their best to expand their area towards Gorkha Kingdom (now Nepal) which led to a massive war between British India and Gorkha Kingdom. This massive war is called ‘Anglo-Nepalese War’ which began in 1814 and ended in 1816.

After the end of this war in 1816, a treaty (an agreement) was signed between British India and Gorkha Kingdom called ‘Treaty of Sagauli’. Through this treaty, we find out that Gorkha Kingdom lost Darjeeling and Sikkim which went to British India. While British India could not acquire the 300 square kilometer of area between the triangle of Limpiyadhura, Lipulekh Pass and Gunji (which is the disputed area at present).

With all this, a new map was released after the war and under the treaty defining the boundaries and ownership of the areas. Here is the map:

According to the treaty and the new map released at that time, today’s disputed land (triangle of Limpiyadhura, Lipulekh Pass and Gunji) went to Gorkha Kingdom and it became the sole owner.

In 1860s, British India realised that the triangular area which they gave to Gorkha Kingdom was of great use to them. They wanted this area to communicate and trade with China as this land was good to build roads and ports. Hence, they changed their map illegally without any treaty or agreement signed and claimed the land to be a part of British India. There was no response from Gorkha Kingdom regarding this, maybe because the kingdom was not in condition to have another war or the kingdom was not interested.

After the independence from British rule in 1947, British India was divided into India and Pakistan while the triangular land came between India and Nepal. In 1960s, the Indo-China relations were bittered resulting in war and crime. To stand against China, India took permission from Nepal to deploy troops and post Indian Army in the triangular land, while Nepal granted the permission. Interestingly, the Indian Army is still present in this region.

Did Nepal ever try to resolve this dispute?

In 1990s, Nepal became a federal state and was officially named as ‘Federal Republic of Nepal’ when a democratic government came into power.

In July 2000, the Nepali Government raised the issue of this disputed area with the former Indian Prime Minister, Mr. Atal Bihari Vajpayee. Both the countries came into an agreement of solving this dispute and deployed researchers and decision-making was started. After some months, this dispute was not solved as India refused to withdraw Indian Army from that region.

There were certain protests held by public too.

When did India-Nepal relations got bad?

The relations were always bad with ‘British India’, but not with ‘India’ as both the countries always shared a strong bond. There is even ‘freedom of movement’ between the two countries which means, Indians can travel, stay and work in Nepal without passport or visa and vice-versa. Also, Nepalis can serve for Indian Army.

In 2000, when India refused to withdraw Indian Army, the relations got little weakened.

In May 2015, the relations were more weakened when India and China decided to use Lipulekh Pass (a place in the disputed triangular area) as a trade route between the countries resulting in protests and opposing speeches from the former Prime Minister of Nepal, Sushil Koirala.

Why didn’t Nepal ask for the area before?

Nepal did ask India for this land before in the year 2000 but no conclusion was made at that point of time due to rejection of India for withdrawing Indian Army. Later in 2015, Nepal protested against India for the area but still, no response was given.

Who does this territory belong to?

Legally and logically, this area belongs to Nepal. This is because of the following points:

Who went wrong? What should not had been done?

There are certain individuals and bodies which went wrong. Here are those:

No doubt, the biggest mistake and wrong thing done by British India was to capture India and attack Nepal, and further, unethically acquire the triangular area going against the signed treaty.

In 2000, India was ruled by Mr. Atal Bihari Vajpayee (Former Prime Minister and a member of BJP) where the withdrawal of Indian Army was rejected and no concern was shown to solve the dispute.

Since 2014, India is again under BJP’s rule as Mr. Narendra Modi (member of BJP) is the Prime Minister. Under this rule:

In 2015, no permission was made by the Indian government from Nepal to commence the trade route with China.

In 2020, no permission was again not made by the Indian government before constructing the road to connect Kailash Mountain (located in China). Moreover, the Indian Defence Minister, Mr. Rajnath Singh attended the opening ceremony with no contact to Nepal.

Social media and some news portals are bombarded with India-Nepal issue. While some Indians refer Nepalis as influenced by China. This is really wrong to call them as there is no point for that. There are even some Indians who are abusing and making fun of Nepal. On the other hand, there are really bad responses from some Nepalis too as there are examples of hatred spreaded against India and a hypothetical map of Nepal where certain Indian territories are shown a part of Nepal. This is also unacceptable.