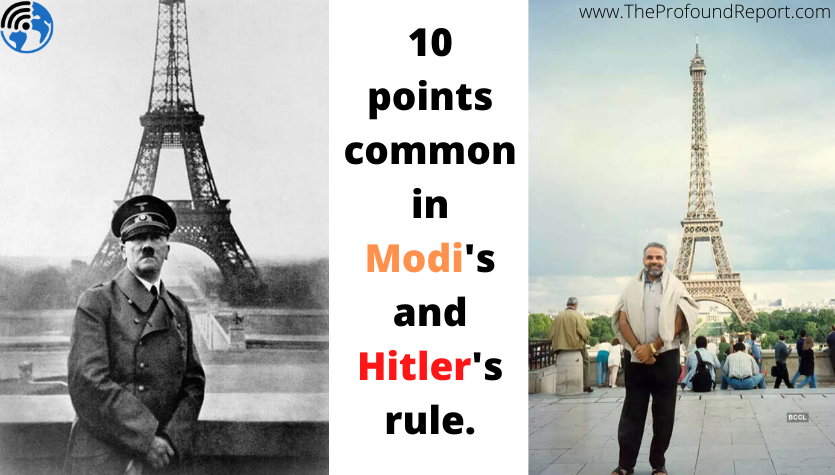 Mr. Narendra Modi is an Indian politician who won elections in 2014 and became the Prime Minister of India. He was re-elected in 2019. Over the time, he has become a really popular due to his frequent foreign visits and certain rules and incidents under his rule.

Mr. Adolf Hitler was a German Politician who came into power in 1933, which was ended due to his suicide in 1945. His rule over Germany is widely critised.

Both the rulers are quite different personalities. Still there are some points which bring the similarity between these two rulers. This can be some coincidences too! This portal neither intends to hurt anyone’s sentiments nor tries to defame any personality or group.

Here are the ten points:

In the last quarter of 2019, Modi’s rule came up with a really controversial bill which was later passed and became an act. It was ‘Citizenship Amendment Bill’ which became, ‘Citizenship Amendment Act’. Under this, Muslims who came to India illegally would not get citizenship in any chance. They have to follow the regular procedure to become citizens. On the other hand, this gives citizenship to Non-Muslims for absolutely free and without asking for any document. It doesn’t matter if the people acquiring citizenship came to India legally or illegally. Their economic background, employment, residence etc. doesn’t matter too.

Similarly, Mr. Hitler revoked citizenship of many Jews at the time of his rule. There was not any reason to do that.

Hence, both the rulers played with citizenship on the basis of ‘religion’.

2. Clarified that there are many other countries for the particular minority

In order to counter the criticism received by the many Indians, other countries (especially Middle-Eastern and European), Modi’s government claimed that there are more than fifty countries with Muslims as majority. Hence, the selected refugees can go there, while there is only one Hindu majority in the world. In reality, there are 3 Hindu-majority countries which include Nepal, India and Mauritius.

Similarly, Hitler expected the German Jews to leave their country and go to other countries which accept Jews or which have Jews as majority.

3. Hided the fact of detention camps.

Similarly, Hitler covered up the facts and working of concentration camps being built in Germany.

4. Spreaded hate and rumours against a community

BJP members are found spreading hatred and rumours against a certain community many times. Mr. Kapil Mishra and Mr. Shah are examples.

Similarly, members of Nazi Party, did the same by spreading propogandas against Jews.

Channels like Aaj Tak, Zee News, TV9 etc. are found ignoring the other side of the coin, not showing certain news and showing a soft-corner for BJP. (reference: Godi Media moments)

6. No update of problems to foreign media and countries

Foreign media and other countries (especially from Europe and Middle-East) are opposing Modi government. Where, Mr. Modi organised a meet with the American President in Mr. Trump during the time of people protesting and riots taking place. While, nothing was discussed or disclosed about that. Big wall along the roads were constructed to hide the reality on the other side.

Similarly, Mr. Hitler covered all the facts about his dictatorship. He constructed walls too at the time Summer Olympics.

7. Books and film to support the rule.

In 2019, ‘PM Narendra Modi’ movie was released which showed the struggles of Mr. Modi and phrased him of being a good person and a politician. (Reference: Official trailer of the film)

In the past also, many books have been released promoting Mr. Modi. There is also a famous comic book named as ‘Baal Narendra’ which was initially released in Gujrat (which was contradicting him). (Reference: Buy this comic book on Flipkart)

Tons of protestors were executed from every part of India against the rule. Some women who took really active part in the protest became a strong stand.

Similarly, tons of people in Germany were protesting against Nazi and Hitler. There was also many women who took an active part and strengthen the protest.

9. Homes and shops, attacked and burned.

Due to riots in Delhi, several shops and houses were attacked and destroyed resulting in mass-destruction and killings. The all arose on the fight against and for the current rule.

Similarly, a lot of shops and houses (especially owned by Jews) were destroyed resulting in destruction and killings. This happened due to the Nazi rule.

In January 2020, a mosque located in Delhi was brutally destroyed and people were killed.

Similarly, a synagogues (a place where Jews worship) was destroyed and set ablaze in Germany under Nazi rule.