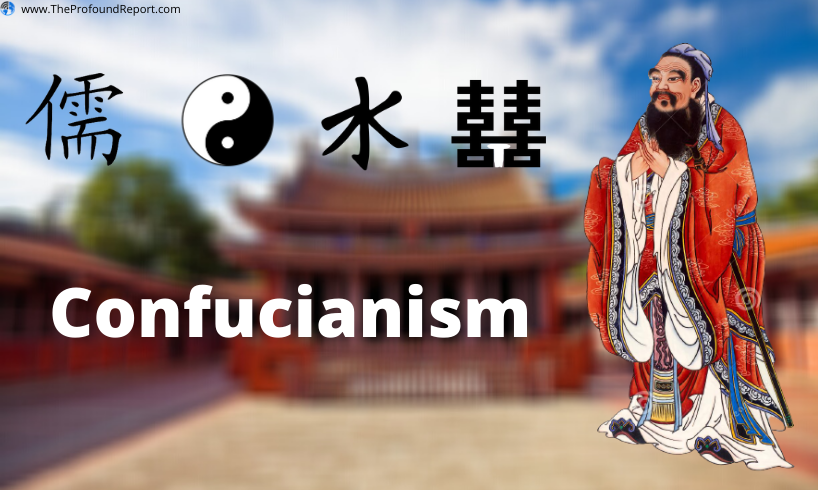 Confucianism (also known as Ruism) is a religion founded in present-day Qufu, China around 479 BC. The religion is based on the teachings and principles of Kong Fuzi who himself started teaching around 531 BC.

Life of The Master

In 551 BC; Kong Fuzi (also known as Confucius) was born on September 28 in Lu State of Zhou Dynasty (present-day in Qufu, China) to Kong He (his father) and Yan Zhengzai (his mother). His father was a Commandant in an army under Zhou Dynasty’s government who passed away when Fuzi was only three year old or so. Later, Fuzi’s mother took the sole responsibility to take care and upbring him.

Since childhood, he was a really wise kid who would engage himself in social work and grasping knowledge from others. It is believed that he was good in his academic life for which he went to school studying the Six Arts (Rites, Music, Archery, Charioteering, Caligraphy and Mathematics).

Around 531 BC; he is said to have worked in various government jobs during his early 20s. During the same time, his political career started where he gained a good reputation and support from the peers. He used to teach the people around him which made him stand out of the crowd.

Around 530 BC; Kong Li (informally named as Boyu) was born to Kong Fuzi and Qiguan.

His attitude and lifestyle was a true inspiration was many.

Around 501 BC; he (about 40 years old) became the ‘Minister of Justice’ by achieving promotions due to his extraordinary understanding of work.

He was a really calm and intelligent human but many people did not support his decisions and teachings. Moreover, dirty politics was present during his time which made him feel sad and worried. Seeing all this, he decided to resign from his job and leave his state.

Around 491; he started travelling across different states to teach and learn from people. He used to learn different things and gain experiences. Meanwhile, he also started to preach the people he met and influence them with his knowledge.

Around 480 BC; his son Kong Li died due to unknown causes.

Around 483 BC; he returned to his state, Lu (present-day China) at the age of 68 or so. He was full of wisdom and intellect. Everyone were surprised to witness the major transformation in him.

He started giving lectures to people about the life and how to live it with justice. He also motivated the students to study themselves and gain knowledge as much as possible. His grandson, Kong Ji was also an intelligent being.

In 479 BC; He passed away due to natural causes. He was then burried by his followers and a structure was built over his grave as a remembrance. His grave is now called ‘Cemetery of Confucius’ located in Qufu, China.

After 479 BC; his disciples started preaching his teachings and messages. They also promoted the practice of principles laid down by their master. Many of them would try their best to note his teachings down.

Hence, several books were written based on his life and teachings. Though, ‘Lun Yu’ (also known as ‘Analects’) is the most revered sacred scripture. All of these texts were written in ‘Classical Chinese’ language.

During the same time, the religion ‘Confucianism’ was established.

There is no direct answer to the first Confucianist Temple or any place of worship as many ruling authorities were against him who demolished many structures and tried to erase the history.

Though, it is possible that Confucius Temple, Qufu which was built in 1724 must be rebuilt over the same land where the first Confucianist temple of the world was built.

In 1666 AD; Confucius Temple, Tainan (located in Taiwan) was built by the Prince, Zheng Chenggong. This place of worship is known for one of the oldest Confucianist Temple in the world.