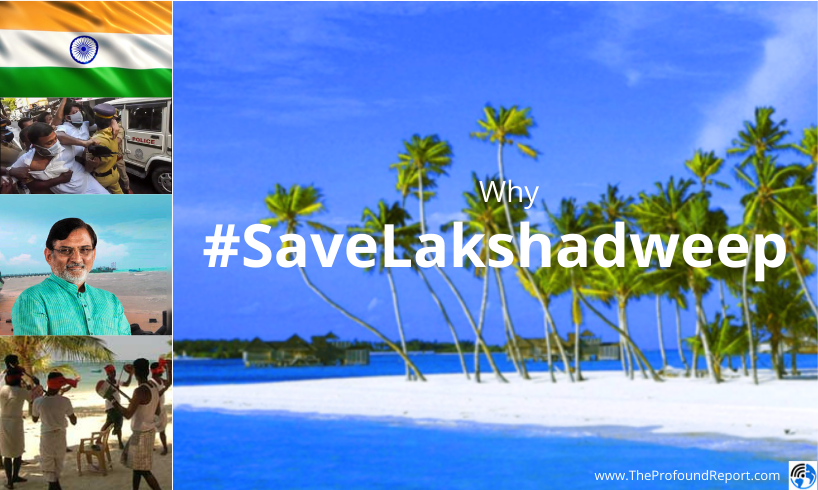 Since the last week of May 2021, we find #SaveLakshadweep trending on various platforms especially Twitter and Instagram. Apart from this some protests are seen on the islands. All of this his happening because of new polices and changes made for Lakshwadeep by current Indian Government. Today we will understand and analyse all of this.

Lakshwadeep is an union territory of India made up of about 36 islands. Kavaratti is of the island and is the capital town. According to Census 2011 (India), the total population here is 64,429 and the majority (roughly 97%) practice Islam followed by Hinduism, Christianity and other beliefs. Malayalam and English are two official languages here where majority of the people speak Malayalam.

Political Framework of this UT

What changes are made?

1. Politicians instead of bureaucrats

The local administrative powers which included education, health-care, agriculture, animal husbandary and fisheries are taken away from local government (Panchaayat) and given to the Administrator.

Individual with more than two children become ineligible contesting elections. Despite being not the top densely populated regions of India, only the people of Lakshwadeep are targeted and not the other regions of India. Moreover, Lakshwadeep has one of the lowest fertility rate in India as per National Family Health Survey. Source: District Level Household & Facility Survey)

The cases of Coronavirus positive individuals was almost none but the cases drastically increased when the new BJP’s Administrator implemented only 48 hours of qurantine of travelers instead of 14 days qurantine which was there before. As of June 1, 2021; there are more than 8,000 positive cases.

5. Goonda Act: All power with Police

Police can arrest anyone and detain him/her for about 1 year and court trials are not needed anymore. Police can also announce anyone as a criminal. Despite the fact that Lakshwadeep is the safest region of India. (Source: Government of India)

The sale and purchase of alcoholic drinks was banned in Lakshwadeep. There was only one shop allowed to serve alcohol in the entire union territorry which is currently under Bangaram Island Resort located in Bangaram Atoll island. The BJP’s new Administrator has officially lifted the ban over alcohol and is promoting the people to buy and sell the same.

Lakshwadeep and Kerala share language and culture where beef-eating can be seen in certain households. Currently, beef is not banned in Kerala but it is now banned in Lakshwadeep. This might not be a big issue or a matter of concern.

What is currently happening?

This topic is trending and various events are taking place. Here are those:

People in Lakshadweep as well as across India are protesting amid the pandemic. (Source Times Now’s report)