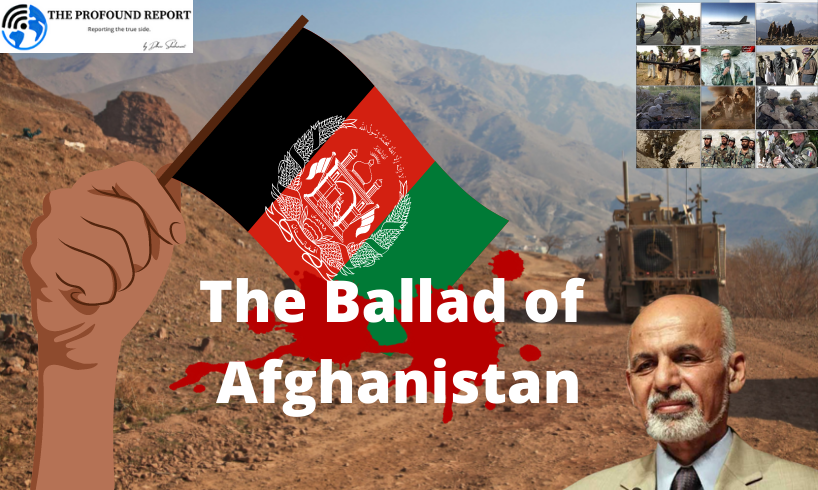 Afghanistan is a landlocked country spreaded across Central and South Asia. This country is blessed with historical remains, beautiful mountains, fruits and food but unfortunately, this country is known more for high crime rate, extreme poverty, war and terrorism. Most of us have been seeing negative news and updates related to Afghanistan, but why is it suffering and why cannot this beautiful country cannot sort this out? In this article, we will learn the complete overview.

To understand this country and the conflict, we need to develop our basics first. Here we start from the history the present scenerio and then finally understanding the conflict.

The land which we call ‘Afghanistan’ today holds significance in learning the old history and the beginning of civilizations. It is to be noted that this land witnessed one of the earliest human civilizations in the world. It is really interesting to learn that the oldest religion, Sanaatan (Hinduism) has significant connections with this land if we talk about the history. Also, it is believed that Prophet Zoroaster (the founder of world’s second oldest religion, Zoroastrianism) was born somewhere in present-day Iran and Afghanistan, though, many researchers claim that he was born in Balkh (a town currently present in Afghanistan).

In 1709; Afghanistan was founded as an independent kingdom by Ahmad Shah Durrani (the founder of Durrani Dynasty).

Around 1839 – 1842; First Anglo-Afghan War took place between Afghans Rebels and British Government. Despite having larger manforce and advance technology, British Government lost to Afghan Rebels which led Afghan Rebels to get back their rights and freedom from British involvement. Emir Dost Mohammad became the king back as soon as the rebels won.

Between 1878 – 1880; Second Anglo-Afghan War took place where British Government attacked again and took over the victory. After this, British Government occupied some area and making it a part of British India but didn’t capture the entire land.

Persecution of ethnicities like Hazaras and religious groups like Buddhists, Hindus, Sikhs and Zoroastrians started at a significant level. Dirty politics, right-wing ideology and extremism can be the causes behind this.

In 1892; Amanullah Khan became the Sovereign of Afghanistan.

In 1919; The Third Afghan-Anglo War took place. This war is also known as ‘Afghanistan Independence War’ as Afghan rebels and most of Afghans wanted to dissolve the entire British control over their country. This war resulted in successful independence of Afghanistan from Birtish controls where British Government recognised this status.

In 1926; Afghanistan was declared to be under a constitutional monarch instead of a simple monarch which gave more freedom and power to the residents and citizens. The rule of Amanullah Khan is noted to be one of the best rules in Afghanistan in the history. He with his only wife, Queen Soraya Tarzi were vocal about women empowerment and promoted monogamy (marrying only one wife at a time). Various reforms were brought where women were not forced to follow strict dress codes and were given equal rights as men. Also, secularism and freedom was promoted.

In 1929; After a lot of chaos created by extremists, unfortunately they succeeded in organising a massive civil war and various riots. The extremists and opposing parties used the name of religion (Islam) to fuel the locals and spreaded rumours and propoganda. It was reported that fake news and morphed photos of the king and queen were used to spread hatred among the people. In response to this, the King and Queen fled to British India for their lives.

On October 15, Mohammed Nadir Shah became the King of Afghanistan who didn’t come out to be a successful king.

In 1933; Mohammed Nadir Shah was assassinated by Abdul Khaliq Hazara using M1895 pistol as he was brainwashed and wanted to take revenge of persecution of Hazaras and taxes scam. It is shocking to know that this assassin was just a 16-year-old schoolboy

On November 8, Mohammed Zahir Shah took his father’s position becoming the king. He established foreign relations and various laws in the country. He is also responsible for the infrastructural development and building economy.

In 1947; British India splitted into two countries, India and Pakistan where Afghanistan started sharing border with Pakistan and Kashmir. Afghan Government (under Zahir Shah) was not happy with continuing Durand Line of 1893 anymore. This led to conflicts and increase in crime rate. In response to this, Zahir The King fired Mohammed Daoud Khan (the Prime Minister) as he supported some rebel groups in Pakistan.

Around the same time, Cold War between USA and USSR began.

In 1965; Afghan Government conducted the first ever Parliamentary elections.

In 1973; Mohammed Daoud Khan conducted a coup controlling the entire country when Zahir The King was on a foreign trip and he declared himself as the President of the country. He also banned Mohammed Zahir Shah to come back in his own country.

Countries like Afghanistan, India etc. chose to become active members of ‘Non-Aligned Movement’ where they neither supported USA nor USSR over Cold War. By this time, Afghanistan was heavily dependent on USSR for trade. In correct this, Afghanistan decided to start trade with other countries like India and USA too which would make them independent as well as develop relations with all the countries.

In 1978; Many people with Mohammed Daoud Khan was assassinated during a coup.

In 1979; Nur Muhammad Taraki became the president but within some months, he was brutally suffocated to death.

Amid this, USSR intervened in the Afghan civil war. This was criticised by many. Also, USSR started funding and guarding communists in Afghanistan where it opposed the two extremists parties, Islamists and Hizbul Mujahideen. USSR kept attacking both the extremist parties. In response to this, USA started funding and supporting Islamists and Hizbul Mujahideen but all this relations are under the table (not officially). It is to be noted that Pakistan is somewhere involved with Hizbul Mujahideen. Meanwhile, Hafizullah Amin took the position of Prime Minister.

Hafizullah couldn’t maintain the image of communism which made USSR kill him so that communism remains alive in the country.

On December 27, Babrak Karmal became the Prime Minister who was a supporter of secularism and liberalism. At this point, the situation in Afghanistan was improving. This PM also came up with a new flag for the country (replacing the communist flag).

In 1986; Dr. Mohammad Najibullah became the President of Afghanistan.

In 1988; The agreement, Geneva Accords was signed which stated that Afghanistan and Pakistan would not interfare in eachother’s politics. It also promised that USA would withdraw its influence over Afghanistan if USSR back steps.

In 1989; USSR agreed with the accord and withdrew its army and all the influence but USA never stopped supplying ammunations to the extremists.

In 1991; USSR was broken into many different regions and ultimately dissolved.

In 1992; The extremist from Hizbul Mujahideen, Burhanuddin Rabbani became the President. Under his rule, the name and form of the country was completely changed. It was then called, ‘Islamic State of Afghanistan’ where Islam was declared as the state religion and right-wing ideology was practiced. The flag of the country was also changed!

In 1994; The terrorist group, Taliban forms with brutal and extremist ideology founded. This group contained a lot of people from Pakistan as well targeting the students specifically. This group is fighting against the Afghan Government and USA. Also, there are many facts which prove Pakistani angle with Taliban. We need to understand that the Taliban is also splitted into two ideologies where it is found either pro-Pakistan or anti-Pakistan.

In 1996; Taliban overthrows control. The group started ruling the country and gaining trust from Afghans. They also changed the flag.

Within sometime, Taliban becomes more extremist. It announced ban on many things like television, music, sports, indoor games, ban on foreigners and so on. Not only this, the religious minorities, non-Pashtu ethnicities and females were fully oppressed. The female education was banned and all females were asked to fully cover themselves. Also, non-Pashtus were being robbed and cleaned out. The non-Muslim places of worship and various statues like Buddhas of Bamiyan were destroyed.

USA successfully invaded Afghanistan to intervene in civil wars, finish Taliban, indirectly run the arms business and under-the-table support to Hizbul Mujahideen. The control of Taliban got weak and the rule slipped off their hands.

On December 22, Hamid Karzai became the new President changing the form and flag of the country. Now, it is no more an ‘Islamist Extremist country’.

In 2014; After the elections, Ashraf Ghani became the President of the country. He is a promoter of modernization and it might be possible that he would bring secularism back to the country once the war situation is handled as he is a supporter of the Former Ruler, Amanullah Khan about which we just studied.

In 2020; USA-Taliban came up with peace talks where USA promised to withdraw the American forces if Taliban gurantees to not to attack USA and keep up ties with Al Qaeda.

In July 2021; USA started withdrawing the forces from Afghanistan

In this response, Taliban is again gearing up to take over Afghanistan and establish the rule. Also, it was reported that about 85% of the entire country is controlled by Taliban. (Source: Reuter’s report)

Ashraf Ghani flew from Afghanistan with family taking resources. Comparitively trustable sources say that he is hiding in Oman for safety and wants to shift to some other country to settle permanently.

On August 15, 2021; Taliban took over 90% of Afghanistan capturing Kabul city and sitting in ARG Presidential Palace (in Kabul).

In September 2021; USA successfully withdrew all their influence over.