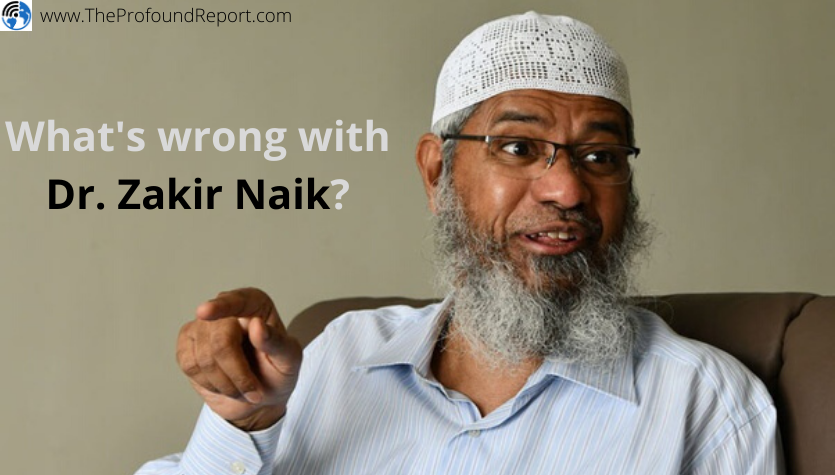 Dr. Zakir Naik is an Indo-Saudi businessman who is founder of Peace TV and Islam Research Foundation.

Studies from Mumbai, India, he is popular for his controversial speeches and weird statements.

We don’t think he is a preacher. Moreover, he is not even a good personality. This is because of the following points:

He enjoys ‘comparative religions’, which means, comparing other religions with the religion he follows all the time. This is not Islamic preaching, this only induces hatred and conflicts amongst people. While, only his religion should have been preached. There is no need to make Islam superior by pointing out other religions. (Reference: His official YouTube video)

He is wanted by the Indian government since long now. In September 2016, he claimed this to be an attack on Indian Muslims. This is just sparking Indian population over religious fights proving that he is trying to get a cover for himself from the government. I believe, if a person is wanted by the authority, it has nothing to do with the other people of same race, religion, gender etc. If he is innocent, then why is he hiding and scared? Islam always teach people to take their stand if they are right.(Reference: His remarks with media)

He believes that construction of religious places except mosques and religious preachings other than Islam is bad. The countries doing so are wrong. (Reference: his interview with Q TV)

He believes that all religions in the world are false, teaching illogical and incorrect things while his religion is the only a true religion. (Reference: his interview with Q TV) On the hand, the even says that all religions pass the same message, hence, we all should adopt a single religion. This proves he isn’t sure about the knowledge himself and forces his thoughts on others.

There is no denying the fact that if person supporting terrorists and terrorism, is equivalent to the terrorists. This is the case with him. He fearlessly promotes terrorism by supporting Osama Bin Laden and Al Qaeda, attacks on USA and asks all the Muslims to become terrorists. (Reference: his speech)

He supports death penalty to Muslims who convert to any other religion in future but doesn’t expect the same penalty for people of other religions converting to Islam. (Reference: his interview with ARY Digital)

He didn’t speak out to his fullest and the way he does other time when he was in an interaction with celebrities (Reference: his interview with Barkha Dutt)

He changes his opinions often by manipulating his words. For example, once he said that Pakistan should not have been created while he is not the same now and was not same with Pakistanis. (Reference: his interview with NDTV)

He tries to insult other religions but he fails everytime. For example, in one of his speech, he tried to make comment against the mighty Hindu gods like Lord Shiv, Lord Ganesh etc. which was of course nothing. (Reference: his speech). One should not comment on anything with half or no knowledge. Right to Speech doesn’t allow right to say anything.

He tried to build a barrier between people of Malaysia by false commenting on Malaysian Hindus, thank to the Malaysian Government who stood up against him. He later had to apologise his act. He even got his Malaysian Permanent Residency in danger. (Reference: his speech in Malaysia)

His teachings and his channel is banned in Bangladesh as he is accused of inspiring one of the gunmen behind an attack in a cafe of Dhaka in 2016 where around 22 people were killed. Later, he admitted for giving the terrorists the basic formula for firings (Reference: A report by DD News and a post by him)

In 2010, he was banned for entering to the United Kingdom and Canada by the respective government due to his numerous unacceptable comments on other religions. (Reference: An article by BBC)

He claimed to disown his own children if he finds them converted to any other religion. He doesn’t care about his role as a father. (Reference: His speech on Peace TV)

He has been training his children in the name of religion. This means, he is not interested in guiding his children towards the religion, principles or becoming human. He ‘”trains” his children. (Reference: His speech on Peace TV)

No one can forget the painful attacks that took place in The States. Mr. Naik doesn’t condemn them, he supports them! (Reference: his speech)

His speeches and his TV channel is banned in countries like India, Bangladesh, Sri Lanka, United Kingdom and Canada. While, Malaysia also condemns him.