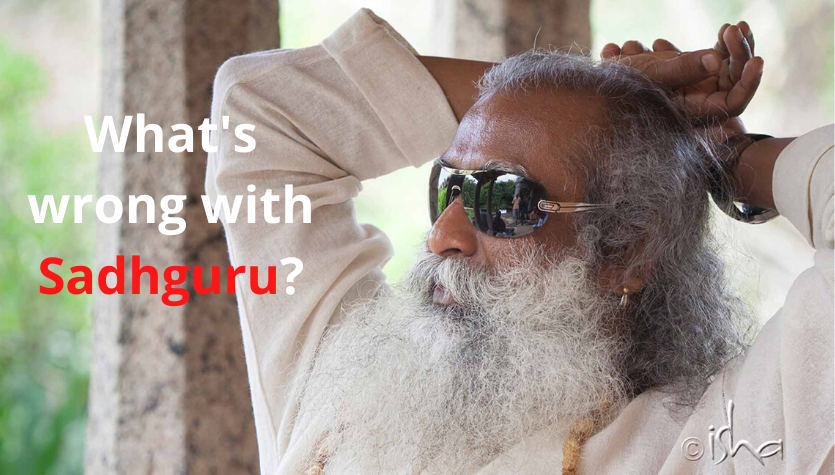 Jaggi Vasudev, generally known as ‘Sadhguru’ is an Indian author who is famous for his preachings, books and his organisation, Isha Foundation.

Because of his religious and spiritual teachings, he has gained immense popularity especially among Hindus.

Isha Foundation (owned by him) came up with a giant statue of Lord Shiv in Coimbatore named as Adiyogi Shiv Statue. It is a really impressive project which shows the beauty of Hinduism and promotes tourism for the city.

Many of this teachings are really informative and influencing. Though, sometimes he is found speaking incorrect knowledge.

Here are the points which prove them:

In one of this interview, he cleared that the human body is made for vegetarian food.

Animals and humans can be classified into three basic categories, which are herbivorous, carnivorous and omnivorous. Where, it is a well-known fact that human beings are ‘omnivorous.

Hence, this judgement of Mr. Sadhguru has been proved wrong. Though, it is interesting to learn that in one of his another meet, we can see him dicey about the exact answer. (Source: his video on his official YT channel)

In one of this show, a woman from Hyderabad asked his kind views on the controversial topic, CAA. While expressing himself, he claimed that Pakistan and Bangladesh chose to be religious republics at the time of partition. (Reference: his video on CAA) He also added that there is discrimination against Hindus in Bangladesh by law.

The real fact is that, both of the countries were divided on religious basis but they didn’t chose to be religious republics at the time of partition. Though, Pakistan was announced as Islamic Republic but in 1956, not before that. While, Bangladesh still remains a non-religious republic, this is why it is known as ‘People’s Republic of Bangladesh’ officially. Also, there is no discrimination against Hindus in Bangladesh by the laws.

During his speech, he told that Hindu marriages is illegal in Pakistan which makes a big problem for Pakistani Hindus. (Reference: his speech)

The real fact is that, Hindu marriages are legal in Pakistan by law. In 2016, Hindu Marriage Bill was passed by National Assembly of Pakistan and later in 2017, the bill was even signed by the President.

In his speech, he said that the foreigners who want to come India for economic opportunities or any other purpose should go through the legal procedure and get citizenship on the legal criteria but the persecuted minorities of Pakistan, Afghanistan and Bangladesh can come to India because of their religion. (Reference: his speech)

In this case, the preacher is found discriminating on the basis of religion. On the other hand, he is concerned about the religious discrimination in the neighbouring countries.

5. Incorrect information about the NRC

In his speech, he tells that NRC has given various options to prove their citizenship which include birth certificate, school footprint, ration card, adhaar card, election registration card or any three witnesses. He also told his audience that NRC is held in every nation. (Reference: his speech)

In reality, the law is really different. The idea of nation-wide NRC has no official information being shared by the government. Though, we can learn from the statements passed by Indian Home Minister, Mr. Amit Shah who cleared that birth certificate, ration card, adhaar card, election registration card etc. are not the basis to prove citizenship! Also, NRC is not held is every nation. (Reference: An interview of Indian Home Minister)

If we compare his figures with the actual figures, the reality is really different.

In his speech, he laughed on the people who are not stable economically. He makes fun of people who don’t have birth certificate, school footprint, ration card, adhaar card, election registration card or any three witnesses. (Reference: his speech)

There are tons of people in our country who were born in homes due to inability to visit a hospital, then how will they obtain a birth certificate?

Around 25.96% of the Indian population is illiterate, which means, they have not attended school, hence they will not have school footprint. (Reference: Census of India – 2011)

There are many who don’t have a ration card, Adhaar card or a election card due to reasons like under-process applications, unavailability of sources to get their card, corruption, inadequate knowledge and so on.

There are tons of nomads and vagabonds who keep on travelling to different places around the state in search of food, work and basic survival. These people won’t have any witnesses.

Is poverty, bad luck and inadequate knowledge their fault? Should they be considered as refugees? Should their citizenship be taken?

His organisation, Isha Foundation operates in Coimbatore. The organisation offers a course, moreover an engineering course for aspirants named as ‘Inner Engineering’. According to the organisation, the course make the students empower themselves to create their life the way they want it. The course revolves around his teachings, speeches, tools for awareness and so on. (Source: Official website of Isha Foundation) We can book the course at www.innerengineering.com.

This course is not wrong until they teach Yoga, meditation, maintaining health and so on. But, it is wrong to call it an ‘engineering’ because engineering is defined as the branch of science and technology concerned with the design, building, and use of engines, machines, and structures. Hence, this is against engineering.

In Hinduism, people often touch feet of elders to show respect and take blessings. This is just a culture, moreover a practice. There is no saying in Hinduism which allows commercialization of blessings and respect.