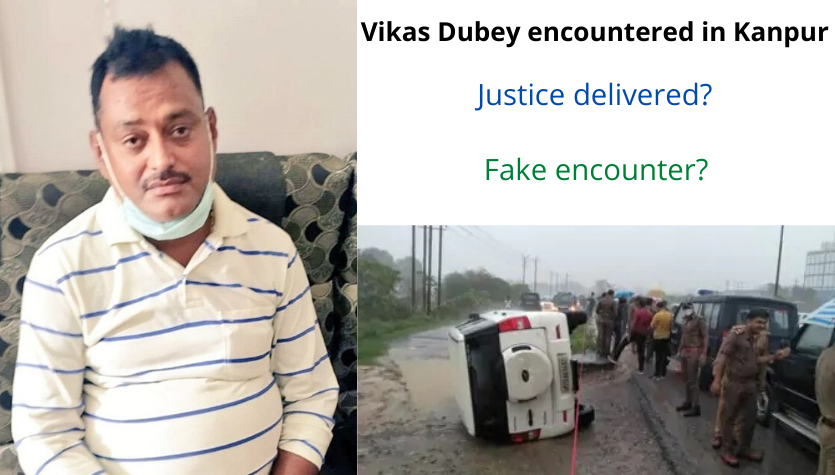 Vikas Dubey, born in 1962, somewhere in Uttar Pradesh, India was a Indian history-sheeter and a gangster popularly known for his multiple crimes and illegal businesses. It is believed that he had more than 60 criminal cases in court which included murders, robberies, kidnapping, smugglings and so on. He had significant connections with most of the leading political parties in India.

If we really want to know more about his criminal records and allegations, it will take a lot of time and will need a separate multiple articles for that. This shows how big this mafia was.

Vikas Dubey resided in multiple locations to prevent himself from getting arrested. Though, his main residence was in his bungalow located in Kanpur city of India.

Uttar Pradesh Police planned to attack his bungalow and arrest the gangster confidentially but this plan was leaked and went to the gangster which made him well-prepared for the situation. Being a heartless criminal, he attacked the Police and killed about 8 policemen in the gun fight. The governmental authorities also decided to destroy his bungalows and cars in search of more leads. (Reference: Another article)

Summing up all the incidents, after July 3, 2020, almost all the gang members working under this mafia were directly encountered. Here is the list of them:

On July 9, 2020, Prabhat Mishra, a gang member of Vikas Dubey was gunned down by police where police claims that he attempted to escape where they encountered him. (Reference: news)

Ranveer Shukla was also a gang member who was shot down by a policeman where police claims that he tried to escape with a stolen car.(Reference: Jagran)

Another gang member shot down by police where police claims him of trying to harm policemen. (Reference: Live Hindustan)

Amar Dubey was Vikas Dubey’s henchman who was also encountered by police amid trying to escape. (Reference: report)

Another gang member encountered by police where similar reason was given. (Reference: report)

On July 10, 2020, the head gangster, Vikas Dubey was being transported to another venue with the police’s supervision in the SUV car, Mahindra TUV300. On the way, he was encountered by a policeman. The police claims that the gangster tried to harm policemen and escape resulting an accident where car was overturned offroad.

After learning about such incidents, many of us would be amazed to see so many coincidences where police needed to encounter all of the gangsters.

Many experts and seniors claim this to be a planned encounter which was fake. Though, investigation for this encounter is still going on and there are so such results from court.

There is no direct answer to this, but yes, there are some points which make people think that it was a planned and fake. Here are those points:

Minutes before the encounter, police was found transporting the gangster in a white coloured Tata Safari. While, it was reported that he was sitting in TUV300.

During the travel, certain media channels decided to follow policemen’s car but those policemen didn’t allow them to do so. Why was it so? (Reference: The Wire)

3. No sight of accident

This is a picture of the car where he was sitting later which met with an accident. We really do not see any chance of car getting overturned. The car is not hit from any side. Most surprisingly, there are no marks of tyre neither on the road nor on the soil (offroad) which are always caused with car put heavy brakes.

4. No bystanders or witnesses

After the encounter, media channels asked the locals nearby and bystanders about this encounter. All of them replied that none of them heard or saw any accidents. They just only heard gunshots. (Reference: interviews of locals)

5. Not really possible to snatch guns with handcuff

Vikas Dubey’s hands must be handcuffed in the car where at least 4 policemen were in the same car. This looks really weird that the gangster snatched a gun and tried to escape. It is not at all simple.

Even if this encountered is planned, what’s wrong in this?

Many of us will be happy to hear the news of a mafia getting killed. This is even right but to a certain point.

Here are the points that prove this alleged planned encounter to be wrong: