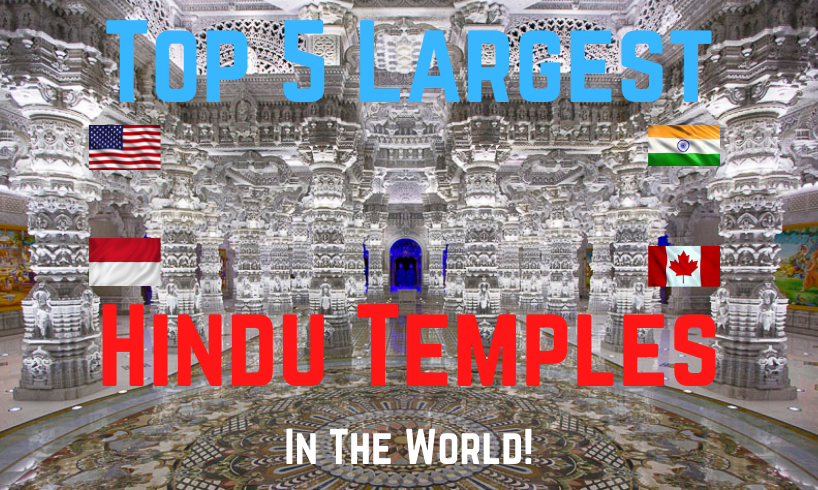 Sanaatan (commonly known as Hinduism) is the oldest survived religion on Earth. It is believed that is was orignated at the time of Indus Valley Civilization dating back to approximately 8,000 years old. This religion is really unique as it comes with a lot of scriptures and practices gifted to the mankind by various sages, prophets and scholars.

We all know the fact that most of the Hindus are found in India and Nepal. We also know that the land of India, Pakistan and Nepal hold significance to study the origin for the same. But, you might not know that the largest temples in the world are not only in India.

Here are the largest Hindu temples in the world that survived:

‘Swaminarayan Akshardham’ is currently the largest Hindu temple (opened in 2014) located in Robbinsville, USA. It is constructed under BAPS denomination. This temple is already the largest but still under-construction which is to be completed by the end of 2021.

Ranganathaswamy Temple is the world’s second largest Hindu temple located in Srirangam, Tamil Nadu (India). This temple is place to worship Vishnu (a form of almighty god) built under King Varma Chola (ruler of the country, Chola) around 1336.

Shree Adya Katyayani Shaktipeeth is the world’s third largest Hindu temple located in the capital city of India which is Delhi. It was built under Baba Nagpal in 1970.

Akshardham is the world’s fourth largest Hindu temple located in Delhi, India. It was built under BAPS denomination in 2005. There are various compounds in it.

Besakih Temple is a the world’s fifth largest Hindu temple located in Bali, Indonesia. It was built under the Indonesian priest, Sri Markandeya between 1000 to 1300. It is dedicated to Lord Shiv (the one almighty god in Sanaatan religion).