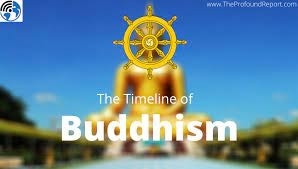 Buddhism is a religion founded in Bodhgaya, Bihar, India somewhere between 500 BC to 490 BC by Gautam Buddha. It is the forth-most followed religion in the world making up 7% of the world’s population. Cambodia, Thailand, Bhutan, Sri Lanka and Japan have the highest percentages of Buddhists in their country. There are about six countries in the world which recognise ‘Buddhism’ as their state (official) religion.

Timeline of Buddhism and The Founder

Around 560 BC, ‘Gautam’ was born in Lumbini, Nepal to a warrior family who served for Shakyas (the clan who ruled the territorry at that time). His father was a hereditary monarch. Since childhood, he was an intelligent and a calm personality who didn’t have any greed to acquire something. He was never interested in succeeding his father in future or claiming a big position.

Around 531 BC, he turned 29 years old and left his home in search of spiritualisation and serious meditation. He planned to devote his entire life to the almighty power and help others as much he could. He also decided not to come back to his home as he wanted to disconnect from the emotional connection humans develop. While, his father always wanted to join politics but Gautam never accepted it. He travelled to various places across Nepal and Bihar (India) and met different people to gain knowlegde. He used to meditate regularly usually sitting beneath a tree. It is noted that he ate whatever he got from the villagers as donation.

Around 530 BC, he met Ālāra Kālāma and Uddaka Rāmaputta who were really good in meditation. Getting inspiration from these professionals, he decided to join them and become a student.

Around 535 BC, he shifted to Bodhgaya, Bihar, India (known as Magadh at that time) and continued his meditation and started preaching. During this time only, he gained enlightment and omniscience. A big transformation was noticed in him. People around him would love to sit near him and get knowledge. After this, he didn’t stop travelling and kept exploring different places. Later, he became an ascetic (a person who dedicates his life to meditation and disconnects from the real world and emotions). Ascetics eat not more than one time in two days.

Around 528 BC, As an ascetic, Gautam took up this type of practice wholeheartedly and decided to settle in Varanasi District, India with his five companions. During this period, he became highly proficient.

Around 525 BC, he thought that whatever he was doing was actually risking death and it did not render any solutions to major problems people face like suffering, pain, death and so on. Hence, he planned to quit ascetism and shift to another place. This was not accepted by his companions and he had to leave ascetism alone.

Around 524 BC, he started residing on the banks of Falgu River and under ‘Bodhi Tree’ located in Bodhgaya, Bihar, India. As he recovered his strength over here, he started understanding more about human life. He analysed how a human can librate in the best possible way living the life peacefully. It is believed that he had a superpower to actually recall his past to the fullest and understand the cycle of life and birth. On the other hand, he kept himself engaged in social welfare of others.

Around 522 BC, it is believed that he attained ‘awakening’ (known as ‘bodhi’ in Indian languages). This is when, Gautam was now called as ‘Gautam Buddha’.

Few weeks after, he started teaching and preaching intensively. He walked to Sārnāth, Uttar Pradesh, India where he taught about ‘Buddhism’ for the first time.

Around 520 BC, he started travelling across North-East India, Nepal, Bhutan, Myanmar and various other locations in order to help people, introduce himself and preach all. His channel grew with time and became popular among various groups.

Around 500 BC, he established the religion, ‘Buddhism’ in Bodhgaya, Bihar, India. Many people converted to the same and were really inspired from Buddha’s teaching.

Around 480 BC, he became a 80 year old man full of wisdom and intellect. Later, his soul left his body in Kuśinagar, Uttar Pradesh, India probably due to pig-bel (a disease caused of food poisoning). It is believed that he asked his monastic followers whether they had any questions before he die. While, it is reported that none of them actually asked questions.

The followers decided to dispose him the way Buddha wanted himself. They referred to the teachings he left. It was a really sad moment where the followers wrapped his body in linen and cotton, encased in an iron vessel, burnt on a pyre. It is noted that the burnt bones of his body was actually distributed among the followers for their emotional connect. There are various historicans are archologers who are researching anf trying to find those burnt bones. Watch: Bones of The Buddha by Icon Films

Timeline of Buddhism after The Founder

Around 260 BC, world’s first Buddhist Temple (a place where Buddhists can worship) was opened. It is called, ‘Mahabodhi Temple’. It was built by Emperor Ashoka. (Reference: UNESCO)

Around 200 BC, Buddhism was successfully spreaded across India.

Around 180 BC, this religion was also spreaded across Kashmir (India), Pakistan and Afghanistan as it was ruled by a supporter of Lord Buddha called ‘Indo-Greek Empire’.

Around 220 BC, The Buddhist monk, Mahinda established a Buddhist school and a Buddhist temple in Sri Lanka. This made many people convert to Buddhism. Currently, more than 70.2% of the people in Sri Lanka call themselves as ‘Buddhists’ as on 2018 (Reference: Demographs of Sri Lanka)

Around 160 BC, The king of Greco-Bactrian Kingdom, Menander I, converted to Buddhism and preached the religion along his empire. This made the religion spread across Iran, Tajikistan, Turkmenistan etc. as well.

Around 121 BC, The Chinese Emperor, Han Wudi established two golden statues of Buddha in his empire. This led to beginning of the spread of Buddhism in China.

Around 400, the ‘Kingdom of Fudan’ (present day Cambodia) began to advocate Buddhism with the departure of Hinduism. Later, the religion also reached Malaysia, Indonesia and Singapore.

Around 485, five monks from Gandhara (a region now located near Peshawar, Pakistan) travelled across Japan, North Korea and South Korea which grew Buddhism.

Later, the religion was spreaded across the world via immigrations, traders, monks, empires and so on.