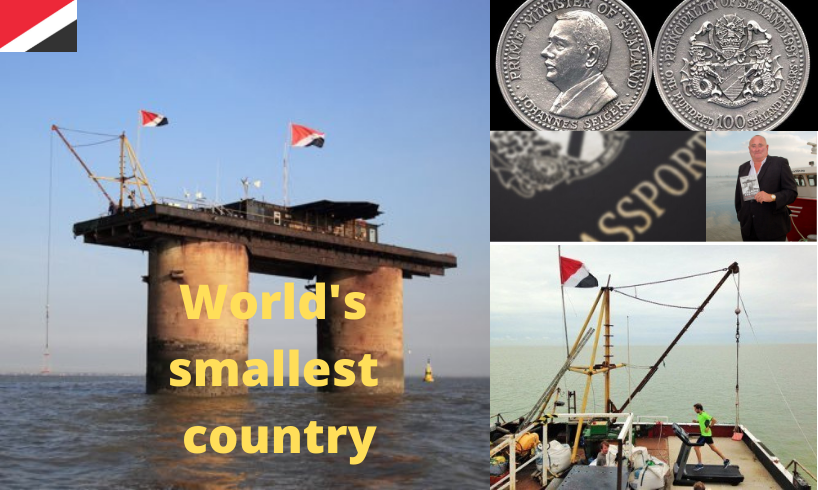 We know about different countries in the world. Some are small, some are big. We expect every country to have a considerable amount of people, government, schools, universities and so on. But, many of us don’t know about the world’s smallest country, no we are not talking about Vatican City.
According to Britishers, Germans and people of Sealand, Sealand is the smallest country in the world. While other countries doesn’t recognize ‘Sealand’ as a country.

Principality of Sealand, commonly known as ‘Sealand’ is a micronation that claims a platform to be its territory. The country is situated on ‘Roughs Tower’, which is an offshore platform located near United Kingdom. It is a platform which was made to guard United Kingdom in World War II. It was designed by Guy Maunsell. The country’s weight is actually measurable, it weighs 40,82,331 kilograms.This is really weird for a nation to be on just a 4,000 square meters platform on a shore.

In 1967, the platform was acquired by the family and associates of Paddy Roy Bates (the founder of the nation).

There are many countries who don’t have their own currency like Ecuador, East Timor, Palau and so on, but this tiny nation (which is not even recognized completely) has its own currency.There currency is ‘Sealand Dollar’, symbolized as ‘SX$’.

The country doesn’t offer citizenship to anyone easily as of now. There is not even a well-defined procedure to do so. This made it the hardest citizenship to acquire in the world. It offers world’s weakest passport to the citizens as this country is recognized by UK and Germany only, which will give the passport holder(s) opportunity to visit these two countries only, that too after a lot of complications.

The exact population of the country is not yet recorded. Though as per 2002, there were 27 people.

The author and a businessman, Michael Roy Bates is referred as the President of the country who is the son of Paddy Roy Bates (the founder of the nation).

‘Sealand Government’ is the official government of the nation. There constitution is named as ‘Sealand Constitution’.

The country has only two types of transport, one is waterways and the other is airways. Where in waterways, people reach there through boats, ships or cruises and in terms of airways, there is no airport, but a place where helicopters can land.

The country has a size of 4,000 sq. meters and is located in North Sea near United Kingdom.