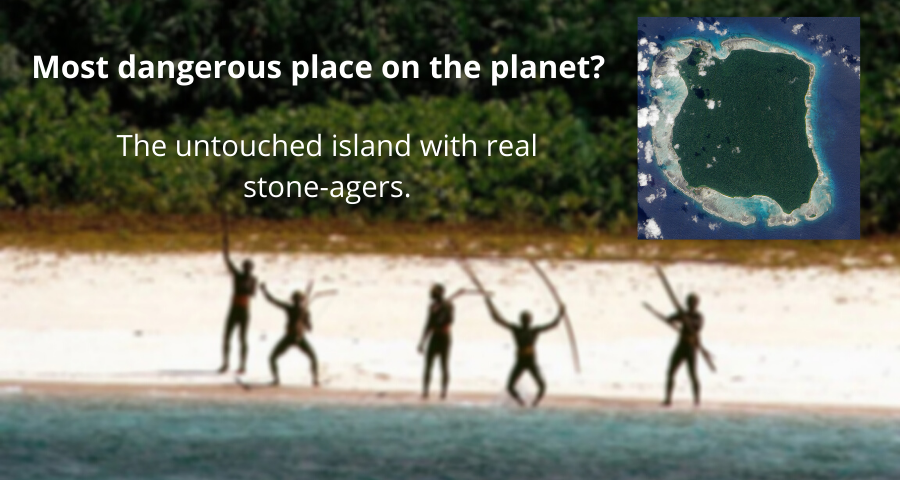 The world has shrunk a lot with the ease in communication and reach. Today, we can all reach almost anywhere in the world and communicate with different people but still, there are some places on Earth, where we can’t do so.

North Sentinel Island is an island located in Bay of Bengal and is considered to be a part of Andaman & Nicobar Islands, India. The residents of this land are called ‘North Sentinelese’. This island has about 59.67 square kilometres of area and the population is really uncertain and unknown. Though, the expected population is about 500 individuals. This land can be considered as of the disputed lands of India as it is disputed with the Sentinelese and the government.

This above picture is a map where we can locate North Sentinel Island, South Andaman and other islands.

This island is no doubt one of the most dangerous place on Earth. Despite being having a small population (called North Sentinelese), the people are immensely powerful and protective towards their land, people and secrets. The population is expert in using bows and arrows as they have killed many outsiders with it. They can even use aim lit arrows which can cause a lot of damages and burning. It is interesting to know that there aim is considered one of the most accurate aims. All of them seem to be very much united and skilled in killing. All of them live a really primitive life just like ancient humans did. They don’t wear clothes and don’t have solid shelters. There language is unknown to us due to lack of communication with them.

To understand everything about this, we will learn about this land from the really beginning. Here is the detailed history of this island from the begininng.

The emergence of humans

North Sentinel Island is considered with one of the oldest human civilizations after Africa (maybe they have migrated from Africa in the past like other humans did). Many sources claim that this island and the Sentinelese are more than 60,000 years old, but this fact has not been proven as of now.

After this stage of upright man and other stages of human, when the era of kings ruling their state came, there still was never an evidence or story of any king conquering this island in the history apart from Chola Rule.

Some sources claim that this island was once conquered by Chola Dynasty, which was a Tamil dynasty ruling major Southern parts of India and present Sri Lanka. This dynasty did not have Andaman & Nicobar Islands as their territory but yes, it had influenced and it used the land. Some sources claim that this land was ruled by Chola Dynasty and they used this island with the name of ‘Thinai Theevu’. There is also information about this island being allegedly used as a secret base by Chola Dynasty and the some North Sentinelese employed as the Army personnels to guard the island from other visitors.

It is expected that the Chola Dynasty left the island within some period of time. Considering people of this dynasty to be the first one to contact North Sentinelese, no one else did in the future on record. It is common to think of fishermen in the past who have been killed by these islanders. Otherwise, no one did.

Later, when India was called ‘British India’ under British Rule, the Britishers conquered even Andaman & Nicobar Islands in 1789. During this period, it is reported that a prisoner escaped from the prison and went to North Sentinel Island not knowing the danger. In search of him, the British officials with the Naval Officer, MV Portman, chased him and reached near the same island. They were shocked to see the prisoner killed and teared apart lying on the soil. This made them keen about the island and they went to the island again with some gifts, food, toys and other necessary stuff for them.

This made their contact with them and then MV Portman fooling the islanders, abducted an old couple and four children from the island and escaped in non time. As soon as they reached Andaman, they fell sick and their treatment could not treat them which resulted in loss of their lives. The doctors claimed that their immunity system was really weak because they are very much used to their lifestyle, climate and food in their island. The doctors also said that the North Sentineleses’ civilization must be 60,000 years old. After these incidents, British government never tried to contact them. (Reference: The American Scholar)

In 1947, India became independent which gave the country control over Andaman & Nicobar Islands while North Sentinel Island was considered a part of it, still the Indian Government never tried to contact them or conquer the island. Still, the island is considered a part of India on records. After the reports of various killings of fishermen who mistakenly reached near the island, the government banned everyone (even the Indian citizens) to travel across the island.

In 1967, the Indian government initiated contact with North Sentinelese with the anthropologist T. N. Pandit. They tried extending a hand of friendship by leaving gifts for the tribe. However, the result was not good as the islanders turned their back towards the officials and sat in defecating position. Moreover, they were quite aggressive making the officials abort the mission.

In March 1970, another attempt was made by T. N. Pandit and his team. The results were quite satisfactory as they accepted the coconuts offered to them. They were quite interested to receive those as coconuts don’t grow on their island. Though, the contact did not last for long and their languages are still unknown. The team tried to communicate with them in local tribal language of Andaman & Nicobar Island but they failed the communication as they didn’t speak that language. (Reference: Actual video of this mission)

After this success, T. N. Pandit considered as an expert on tribal knowledge claimed that India should leave North Sentinelese and their island at their pace. India government should not think of establishing infrastructure or ruling or the island. He also claims that this tribe is quite peaceful and won’t kill without any reason. Hence, no attempt to further contact with them was made.

In 2004, many horrific incidents took place, collectively known as an event called, ‘2004 Indian Ocean Earthquake & Tsunami’. Under this, tsunami and earthquakes led to a lot of destruction and submerging of houses and other infrastructures. This led to major economic loss and killing of living beings especially on the Southern Coasts of India and islands. After this, the Indian Government decided to overview the condition of North Sentinel, provide them aid and help them. This officials were surprised to see their effective and smart management that led to really less destruction (comparatively). When they tried to give them food and aid from helicopter, some of the tribals didn’t let them and started shooting arrows. This made the officials abort the mission.

In 2006, two Indian fishermen mistakenly went close to their island while hunting for crabs. This was not appreciated by the North Sentinelese and those fishermen were brutally killed.

In 2011, India’s regular population count was held, called ‘Census 2011’ in which North Sentinelese were counted too, but without additional information. To do this, a helicopter with officials in it was sent near the island just for some minutes and the population was estimated. The rough figure estimated was 200 to 500 in 2011. Though, no one has even crossed the beachland of the island, hence, no one knows how many people reside there.

In November 2018, John Allen Chau, an American Christian who was an avid traveller and loved to travel in nature was enjoying in Andaman & Nicobar Islands in 2018 where he decided to reach North Sentinel and try to contact with the residents there. His main aim was to mark the history, tell them about Lord Jesus Christ and convert the residents into Christianity. Knowing the fact, that Indian government would never give him permit to do so, he convinced and bribed some fishermen owning a boat to take him there. The fishermen warned him and told about the danger but he didn’t care. The fishermen told the media that he took a bible, some food and some toys with him to the island. Mr. Chau gave the fishermen his diary and asked them to handover it his parents if he doesn’t return (the diary was a note to his parents and the rest of world about him and his keen attitude to preach Christianity). As soon as he reached the soil, he was shot arrows getting killed. (Reference: The Guardian’s news on Chau) This incident got a lot of international attention and many of the people got to know about this island. Sadly, the Indian authorities couldn’t search for his dead body. This incident shook Mr. Pandit a lot and he was surprised to learn this.

Later, seven fishermen were arrested by Andaman & Nicobar Police who were involved in giving him path to the island. (Reference: Scroll’s news on fishermen’s arrest)

Why doesn’t Indian government directly attack the island and control it?

The Indian Government can easily reach the island with armed forces and officials and establish their control but they don’t do it. This is because:1

The Indian anthropologist and a tribal expert, T. N. Pandit, the first Indian to establish contact with them claimed that the tribe is quite peaceful and harmless if outsiders don’t disturb them. North Sentinelese and their island should be left at their pace. Hence Indian government respects his words.

They don’t appreciate outsiders. We have seen examples of them where they killed fishermen, killed an American, showed disagreement gestures, attacking chopers etc.

If Indian government tries to establish their control over the island, it will definitely result in violence. There would be injuries and killings. To prevent all this and minimise violence, India is following the words of the father of the nation, Mr. Gandhi.

If Indian government ever establish their control, it will lead to a lot of killings of North Sentinelese people. While the remaining population may never be happy with it and may never be satisfied with their integration with rest of the world. Hence, if the residents are not happy, then what is the use?

5. Loss of tribal culture and lifestyle

Their tribe, culture, lifestyle, food and everything will vanish. We know that this is never good. Moreover, country like India which is known for tolerance, secularism, acceptance and democracy, will not do it.

From the incident and research of British government over the kidnapped North Sentineleses, we found that they have a much weak immune system as they have never travelled in different locations, very much used to their climate, used to their food and come from really old civilization. Hence, the tribals would actually be affected from outside connection.

7. Weak knowledge about the island

It is for sure that not even a single outsider has ever even reached inside the island. Moreover, helicopters also haven’t been explored the area well. Hence, we don’t have proper knowledge about the island. We don’t know what is there and what is not.

8. Not really concerned about the island

There are around 1,208 islands owned by India. Also, Andaman & Nicobar Islands are sufficient in that location. While India has control over ‘South Sentinel’. Hence, India is not really concerned about that particular island to occupy.

If this island is occupied too, then world will lose this mysteriousness and uniqueness of this island. While, this island can be used for research and help in future.