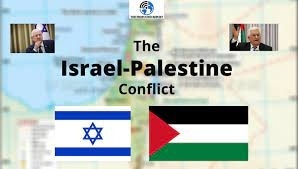 Israel is a country in the Middle-East. It is popular for the beautiful beaches, sacred sites and Judaism found here.

Palestine, officially recognised as ‘States of Palestine’ by United Nation and about eighty other countries. It is popular for old markets, food and historical remains.

Both the countries share border and there is an ongoing conflict among them where Israel claims entire Palestine to be a part of Israel only while Palestine claims to be a separate country.

What is The conflict for?

In the Middle-East, there are eighteen countries (including Israel and Palestine). If we see the map, we see three parts, Israel, West Bank and Gaza. All together bordered with Egypt, Jordan, Syria, Lebanon and Mediterranean Sea.

‘Gaza’ and ‘West Bank’ regions together make up the country, ‘States of Palestine’ while Israeli Government considers both of these regions (the entire Palestine) to be a part of ‘Israel’.

The history of this land

To understand the conflict further, we need to know the history of this land well.

Israel was ruled by many dynasties in different eras. According to the holy book of Judaism, Tanakh (Hebrew Bible), ‘Saul Ben Kish’ was the first ruler of this region who named it as ‘United Kingdom of Israel’. Dates are still unknown as there is conflicting data from various sources but yes, the reign was possibly from 1037 BC to 1010 BC (about 3,057 years old). Later, the reign was succeeded by various other rulers.

Fast forwarding the history to 63 BC (about 2,083 years before), Roman Empire captured the land. After many years, Roman Empire started spreading Christianity amongst the population. Later in the year 70, majority of the native people of the land started to revolt against the empire for their religious freedom and breaking fire temples (Jewish worship places). This led to collapse of Roman Empire in the land (what we call it as Israel and Palestine today).

After some small rulers’ and military personnels’ control, Byzantine Dynasty captured the land which made it a part of ‘Byzantine Empire’ in 629. This empire was not supported by most of the natives of the land as the empire banned Jews to enter Jerusalem and allowed them to visit the place for only once a year, that too just to visit ‘Western Wall’ (a sacred worship place for Jews) on Tisha B’Av (an important Jewish day).

After the collapse of this empire, many rulers ruled. Fast forwarding to the year, 1516;

In 1299, Ottoman Dynasty was founded by Osman Ghazi (Osman I) in Bilecik Province, Turkey which later captured quite big part of Middle-East and some part of Europe and Africa. While, today’s Israel and Palestine became of part of this empire in 1516. By this time, the land witnessed a diverse population where people followed different religions (Judaism, Islam and Christianity) and cultures. There was some biases and religious discrimination seen under the rule but looking at the events, it seemed that everyone lived peacefully and equally.

Later in 18th and 19th century, many European Jews migrated to Israel due to persecution in their home country. Resulting in very high increasing numbers of Jews by the first decade of 20th century.

After the World War I (1914 – 1918), the Ottoman Empire collapsed resulting in French Empire and British Empire enter Middle-East, where, Britain took over the land of Israel and Palestine and named it as ‘British Mandate of Palestine’.

In the British rule, the government accepted Jewish people from other countries to immigrate which led to huge number of immigration in Middle-East provoking conflict between Jews and Muslims. In this response, the government limited the Jews’ immigration.

In 1947, the tensions between Jews and Muslims grew to a large extent resulting in violence and increase in hatred. For this, United Nations (UN) approved the decision of British Government to divide the land into two countries, Israel and Palestine. Implementing this, British Empire left the country (dissolving the rule) with the mess they have created stating that they did justice by giving Jews a Jewish state and Muslims by giving them independence.

While, Israel unethically changed the map drawn by United Nations and didn’t make it possible for Palestine to become an independent country.

As soon as other Arab countries gained independence, they united all together for a war with Israel to give Palestine independence and form Palestine as a separate nation. This war was known as ‘1948 Arab–Israeli War’. In 1967, another war named as ‘Six Day War’ also took place.

Unfortunately, Israel won the wars and successfully changed the borders and didn’t give Palestine their independence. They even forcefully expelled Muslim population from Israel while these Muslims migrated to neighbouring countries like Jordan, Egypt, Syria and Lebanon. Still, majority of these refugees went to Palestine (the land which was to become a country). Moreover, they unethically occupied lands from Syria, Jordan and Egypt.

During and after 1980s, other Arab countries made peace with Israel. Though, no ‘Treaty of Peace’ was made but still the relations got better.

What is the current scenario?

Currently, Israel is an independent nation which considers ‘West Bank’ and ‘Gaza’ to be a part of Israel itself while UN with eighty other countries consider those two regions to be separate from Israel forming one country ‘States of Palestine’.

‘States of Palestine’ did not get recognition of being a separate nation from its neighbour, Israel and also Palestine did not get the complete land it deserved.

More than 75% of Israelis consider themselves as Jews followed by Muslims, Christians and atheists. On the other hand, ‘States of Palestine’ compromise 99% of Muslims and 1% of Christians.

What should be done to resolve the dispute?

Here are the courses of action which should be done to resolve this international dispute:

Rest of the countries should;