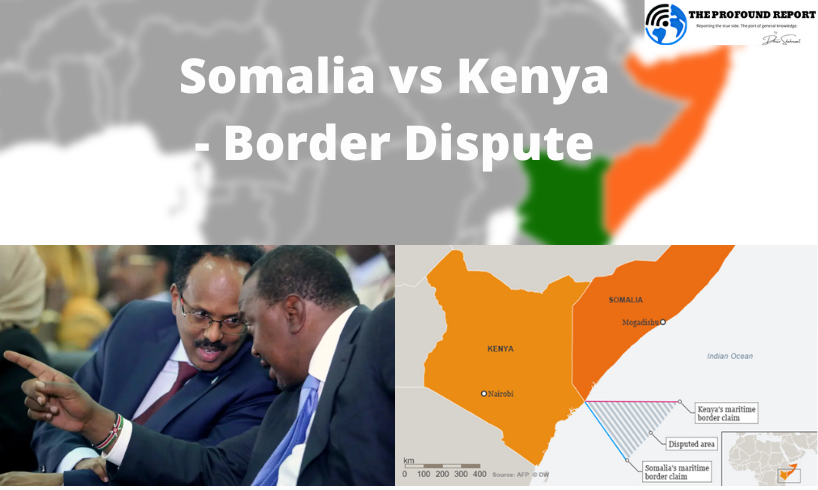 Somalia, officially known as ‘Federal Republic of Somalia’ is an African country in the ‘Horn of Africa’. It is popular for ocean pirates, unstable government, poverty, natural biodiversity, national parks and culture.

Kenya, officially known as ‘Republic of Kenya’ is an African country. It is popular for natural reserves, national parks, wildlife and so on. This country is often tagged as the most developed nation of East and Central Africa.

Both the countries share maritime and land border with each other. They have an active in-force border dispute over its maritime boundary due to the conflicting claims between Somalian Government and Kenyan Government.

In this above map, we see Kenya and Somalia separated by the white-lined land border. With the end of land border, the maritime border continues to divide the ocean. The blue line shows Somalia’s claim of the maritime boundary based on their reasoning that the border should continue syncing with the land border which means the maritime border should go on in the ocean in the same direction as the land border is going. Opposing this, Kenyan Government claims the pink-lined border by giving justification of going parallel with the latitude’s equator instead of going with the same direction. This has created a border dispute between the nations for the triangular region (the shaded part).

It is to be noted that this dispute is not just for the sovereignty, maritime boundary and economic zone. This disputed region becomes more important because of the noted presence of oil and gas reserves under the ocean in the disputed triangular area.

In 1927-1933, ‘1927/1933 Treaty Arrangement between Italy and United Kingdom’ was signed between the countries concerning boundaries of their territories in East Africa. But this treaty didn’t clear the maritime boundaries.

In 1960, Somalia gain independence from Italy and certain British influence.

In 1963, Kenya became ‘Republic of Kenya’ gaining independence from British rule (under the name, British Kenya or Kenya Colony).

Between 1963 to 1965, the maritime dispute came into a formal existence when Somalia took Kenya to International Court of Justice. Since then, there has been reports of random exchanges of armed attacks.

Between 1979 and 2014, Kenya acclaimed that Somalia demonstrated Kenya’s theory of parallel line to latitude. But this was rejected by Somalia as well as International Court of Justice.

In 2009, both countries agreed with a memorandum of understanding to settle this dispute with fair negotiations.

In 2017, International Court of Justice (ICJ) intervened in this dispute and stated that it does have right to interfere rejecting Kenya’s failed 2009 Agreement.

In 2021, ICJ released a balanced verdict to solve this dispute. It simply divided the disputed region equally into parts by drawing another line in between the two differently claimed lines.

Somalian Government immediately announced this as a victory for themselves and called it a fair deal. On October 12, Somalian Minister of Information, Culture and Tourism, Mr. Osman Dubbe welcomed and congratulated this on Twitter.

While, Kenyan Government rejected this verdict, moreover it opted out of ICJ and announced that it is ready to go for a war in this case.

In 2022, Kenyan Navy and Somalian Navy is seen patrolling the region. There are reports of casualities and attacks reported regularly between the two countries. For example, the death of The Kenyan Soldier, Johnson ole Kiyaipi in a bomb blast because of Al-Shabab (a terrorist group in Somalia) in March.