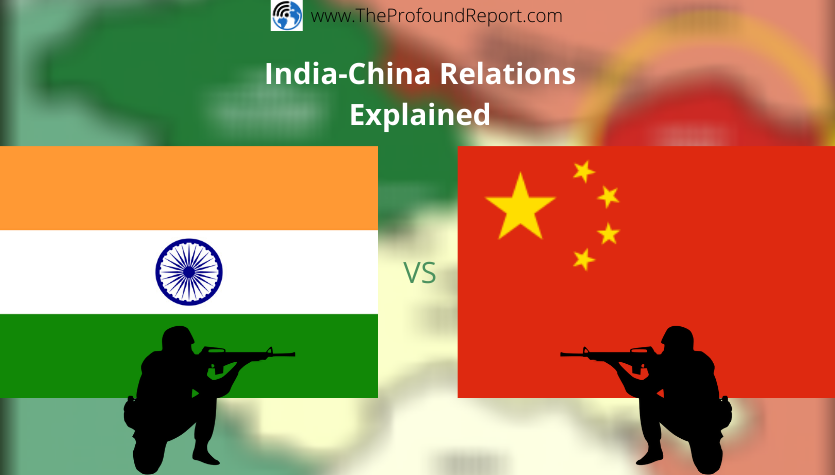 This article will explain the entire ongoing conflict between India and China with all the proofs and sources.

India, officially known as ‘India or ‘Bharat’ is the world’s seventh largest country, located in South Asia. The military strength of the country is ranked as number 4 in the world by Global Fire Power.

China, officially known as ‘People’s Republic of China’ is the world’s fourth largest country by land and most populous country in the world. The military strength of the country is ranked as number 3 in the world by Global Fire Power.

There is an ongoing conflict between India and China which is recieving a lot of international attention.

India established diplomatic relations with China on April 1, 1950 where Tibet was considered a part of China (still considered).

In 1954, despite of establishing peaceful relations in 1950 and India showing a region Aksai Chin, China illegally and unethically constructed a road over the land.

This started the disputes and bad relations between India and China.

The first war between these two countries was the ‘Sino-Indian War’ in 1962 which lasted for almost a month. The main cause of this war was because of the land dispute of Aksai Chin. China won the war because of comparatively weak Indian Army than the Chinese one at that period of time. Since then, India shows Aksai Chin to be a part of India on the Official Map of India while China also claims the land.

In reality, Aksai Chin region is administered by China while India only shows it on the map.

Aksai Chin undoubtedly belongs to India while China is having unauthorised control over it. This is because:

While behind this, China was strengthening the China-Pakistan relations in order to weaken India and support terrorism (as Pakistan has hold over POK illegally and is found sending terrorists).

In 1967, some tensions provoking wars took place on India-China border between the national armies on India’s Sikkim border. We call it ‘Nathu La Incident’, and the other as, ‘Cho La Incident’. This led to a lot of violence, killings, loss in foreign trade and loss of land for India, again.

After all this, India tried to strengthen the relations with China and solve the border disputes like:

but there was no major good responses from China.

In 2017, China again illegally tried to capture the Bhutanese land, Doklam which is shown in Bhutanese map since 1960s. In this matter, India had to face China on behalf of Bhutan in order to stand against injustice and maintain friendship with Bhutan.

Some serious incidents took place in which shook the world and showed China’s malpractices. Here are some of the deeds:

Minorities in the country like non-Mandarin speakers, Muslims, Tibetans etc. are in a bad condition. Where, Tibet doesn’t even consider to be a part of China where they have their own President and government body. Despite of diversity in the country, CCP doesn’t recognize democracy and secularism, which leads to disputes with Taiwan (Republic of China), Hong Kong, Macau and Tibet which are struggling for freedom. This went to another level when reports of attack at mosques and racism were reported. In 2019, CCP has been accused for managing some rapid campaign to separate Muslim children from their families.

It is reported that China always tries to develop bio-bombs which could lead to mass killings and spreading of infections. A lab in Wuhan, China was experimenting on bats to develop the same which resulted in spread of Coronavirus disease. China got to this disease in September 2019 or early itself but it hided the fact to the world which led to outbreak in December 2019 all around the world leading to a lot of killings while China is all sorted with this disease.

On May 10, 2020, despite of the global pandemic and other issues, Chinese Army again clashed with Indian Army on Sikkim border for Nathu La. This injured 11 Indian soldiers.

In June 2020, China tried to shift the Chinese border to capture Ladakh’s Pangong Tso (a lake) and threaten India for a war and destruction. The country also constructed infrastructures on disputed lands. Though, Indian Army is prepared for everything and won’t give the land at any cost.

In order to resolve this, the Army officials of both the countries came up with a meeting while Chinese official didn’t show any positive response and no conclusion was made.