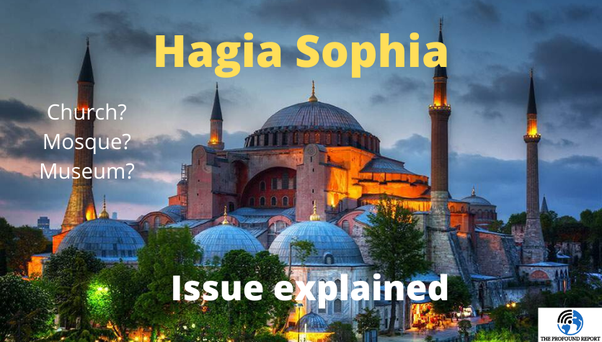 Turkey, officially known as ‘Republic of Turkey’ is a country located in Asia as well as Europe.

Hagia Sophia is an ancient structure which is considered in UNESCO World Heritage Site.

Here is a short and brief history of Hagia Sophia and the timeline.

This site was built as a church in the 6th century AD (between the years, 532 and 537) by Byzantine Emperor who ruled Turkey at that point of time.

After more than 900 years, Ottoman Empire conquered the land in 1453 (what we call it as ‘Turkey’ at present) and converted ‘Hagia Sophia Church’ into ‘Great Mosque of Ayasofya’. In short, the church was converted into a mosque.

The Ottoman Empire which which conquered Turkey in 1453 collapsed in 1923 due to poor leadership, inflation, imbalance of trade and certain malpractices.

The conversation into museum (1923)

After the collapse, in the same year (1923), Mr. Mustafa Kemal Atatürk being a member of ‘Republican People’s Party’ became the first President of Republic of Turkey who converted this site into a museum to solve the issue and signify that Turkey is a secular country where all religions are respected and everyone are treated equally.

In 2020, Recep Tayyip Erdoğan, the current President of Turkey and a member of ‘Justice and Development Party’ decided to reconvert this site into a mosque.

The current President of Turkey, Mr. Tayyip Erdoğan was the last Prime Minister of Turkey before when he completely removed the position of ‘Prime Minister’.

Surprisingly, he himself promoted secularism and respect to all religions but he has completely changed in these coming years due to the greed, arrogance and dirty politics.

In the last days of him being a Prime Minister and after becoming a President, he drastically failed in his role and responsibilities. Currently, the Turks and media are criticizing him a lot.

Many of us believe that this all is politics. He is doing such things to divert the topics of economic downfall, increasing unemployment and all the other government failures to the religious ones. We know that it has become easy to divert people and fool them in in the name of religion as it feels like a personal moreover a sensitive thing for many.

What should be done?

As we discussed that this all is just mere dirty politics and diverts the people, we should not forget the other governmental failures and we should point out those too.

According to the history, justice can be delivered if it is re-converted to a church or a museum (like it was before). This will correct the historical mistakes and give respect to the Turkish Christians.