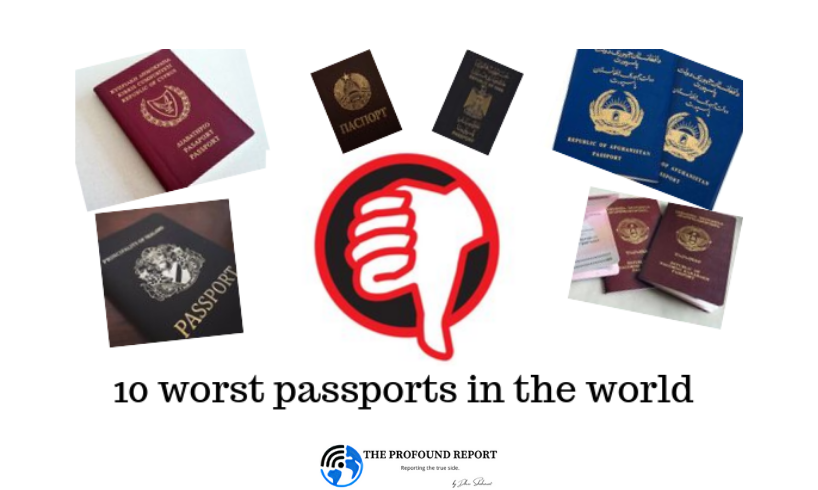 Everyone want to visit different countries to experience different lives, see new culture, fascinate traditions and get a look of new lifestyle. Many of us like to travel for relaxation and psychological satisfaction too! Passport is the thing without which no one can travel abroad. The more stronger one’s passport is, the more Visa-free countries there will be and easier the Visa-processes will be. Though, there are countries in the world where the citizens enjoy a really few Visa-free access or even are forbidden to visit certain countries.
Here are the countries with world’s worst passports (ranked):

Afghanistan is a landlocked country located in South-Central Asia. It is majorly bordered by Pakistan, Iran and Turkmenistan. It is known for it’s historical remains, hills, museums, mosques and mountains. It offers passport to citizens which gives Visa-free access to seven countries.

Visa free access = 1 countryAllowed to visit = 7 countries
Northern Cyprus is a country compromising Northern part of Cyprus. It is an island country located in Europe near Turkey, Syria and Lebanon. It is popular for it’s beaches, hills, historical remains and a national park. The country gives passport which offers travel to United States of America, England, France, Pakistan, Turkey, United Arab Emirates and Tanzania. Where, Turkey is a Visa-free access for Northern Cypriot Passport holders.

Visa free access = 5 countriesAllowed to visit = 5 countries
South Ossetia is a landlocked country in South Caucasus. It is known for its mountains, lakes, valleys and beaches. It offers passport to the citizens which can be used to enter Nicaragua, Russia, Tuvalu, Vanuatu and South Ossetia as only these countries recognize it. All these country give Visa-free access.

Visa free access = 1 countryAllowed to visit = 5 countries
South Ossetia is a landlocked country in South Caucasus. It is known for its volcanic plateau, mountains, valleys and historical remains. It offers passport to the citizens which can be used to enter Abkhazia, Russia, Venezuela, Nicaragua and Nauru only, as only these countries recognize it. It offers Visa-free visit to Venezuela.

Visa free access = 2 countriesAllowed to visit = 3 countries
Transnistria is a landlocked country between Dniester river and Ukraine. It is known for its parks, museums and natural beauty. It offers passport to the citizens which can be used to enter Abkhazia, South Ossetia and Karabakh only. Moreover, South Ossetia and Karabakh offer Visa-free access to citizens of this country.

Karabakh is a landlocked country in South Caucasus. It is known for its historical remains, caves, plateau, mountains and natural beauty. It offers passport to the citizens which can be used to enter Abkhazia, South Ossetia and Transnistria only where all these three countries allow Visa-free visit.

The country which ranks first in this criteria is ‘Sealand’. This nation is located on a offshore platform near United Kingdom with a population of 27 (as on 2002). The passports issued to the citizens of this country are so weak that hardly any one owns it. Even the fact is still unknown that the president of this country, Michael Roy Bates owns a Sealandic Passport or not. Though, it is sure that he owns a British Passport and lives in Britain only, he might have dual-citizenship. This country is recognized by United Kingdom and Germany only. Thus, we can conclude, that anyone with this country’s passport can visit UK and Germany only, that too with a lot of complications.