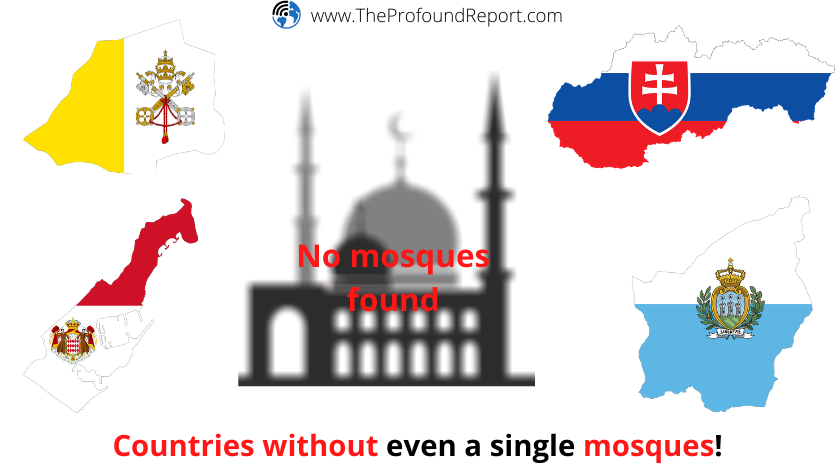 Islam is a religion founded in the seventh century and is the second-most followed religion in the world. It is interesting to know that there is literally only one country in the world without Muslim population, and the country is called ‘Vatican City’. This country has a population of about 825 people (as of 2019) where there is not even a single individual who is considered Muslim. While in all other 196 countries, there are Muslims.

We know that there people found in every country (except Vatican City) who follow Islam and these people worship in their religious places called ‘mosques’. And, it is surprising to know that there are certain countries which don’t have even a single mosque!

Vatican City is a country located in Europe. The country is entirely surrounded by Rome, Italy and is popular for the museums, ancient Roman sculptures, churches and the giant assembly hall. This country is spreaded across 121 acres of land with around population of just 825 heads.

As discussed earlier, it is the only country in the world without any Muslim. Construction of any religious place other than Catholic is not allowed. Hence, there are no mosques found here.

Slovakia is a landlocked country located in Europe. The country is popular for the mountains, castles, caves and churches found here. There were around 0.2% Muslims (more than 5,000 approximately) in the country in 2010. While, there is absolutely not even a single mosque in a country as it is forbidden by the Slovak Government. Moreover, there is injustice and discrimination faced by Muslims in this country.

San Marino is a small country located in Europe. It is landlocked by Italy and is popular for mountain cliffs, notable buildings and churches. There are almost 34,000 people here out of which 0.02% of the population are Muslims. There is no mosque in this country due to really less population which is around 7 individuals only.

Monaco, officially known as ‘Principality of Monaco’ is a country located in Europe, bordered with France and Mediterranean Sea. Out of the almost 39,000 individuals, only 0.5% of the population practice Islam which constitute less than 200 Muslims. Due to really less population, there are no mosques here. People here need to cross the border to reach France if they want to visit a mosque, and the mosque is just a 5 minutes drive from the city centre.