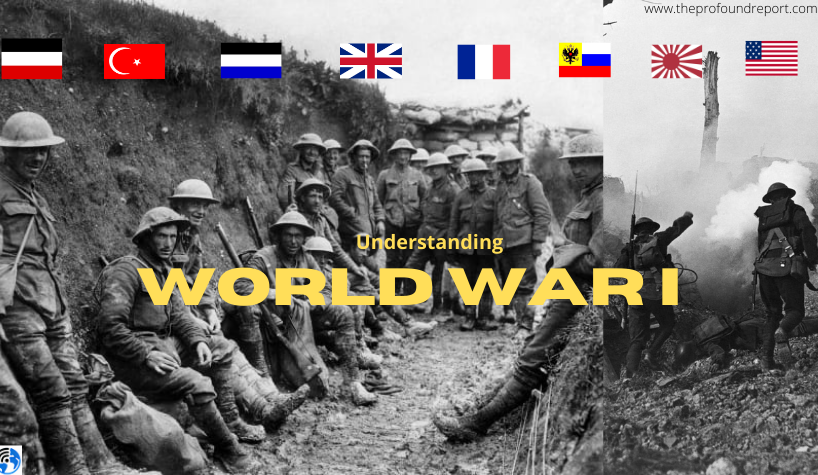 World has witnessed thousands of wars in different time periods. Most of them are caused because of dirty politics, propogandas, natural resources and religious/cultural clashes. The ‘World Wars’ were indeed one of the biggest wars in the mankind history causing a lot of destruction and bloodshed.

About two world wars have occured as of now, these are known as ‘World War 1’ and ‘World War 2’. In World Wars, different countries take part either as allied powers or central powers. ‘Allied powers’ are the countries which have joined the wars in an alliance to stand with the allied countries. While, ‘central powers’ are the countries fighting against the enemy countries and enemy countries’ allied powers. There are various causes and political agendas involved which causes such world wars or for any war for that matter.

Today, we are going to breakdown the understanding of the first world war’s overview in a simple manner.

World War 1 was a massive war engaging many principal nations across the globe. This war lasted exactly for 4 years 3 months and 14 days which is from July 28, 1914 to November 11, 1918 causing more than 2 crore deaths and more than 2.1 crores wounded/injured. (Source: Centre Robert Schuman)

There were about 5 nations/empires who took part in the war as ‘allied powers’ which included USSR (Russian Empire), French Empire, British Empire and Japan. While, the ‘central powers’ were Austro-Hungarian Empire, Germany and Ottoman Empire. (Source: Econstor Education)

Who was against whom?

Why did it happen?

The causes of WW1 can be divided into these four simple philosophies (shortened as MAIN):

2. Alliance System: Many countries signed different treaties and developed foreign relations. It is reported that some countries also signed “secret” deeds and business deals amongst them. Two major alliances were, ‘Triple Alliance 1882’ (between Germany, Austro-Hungarian Empire and Italy) and ‘Triple Entente 1907’ (between Britain, France and Russia).

3. Imperialism: European countries (especially Britian, France and Germany) wanted to capture and create their colonies in Africa and Asia so that they get more resources, manpower and authority. All of this greed led to conflicts.

4. Nationalism: The government of different countries propogated their versions of nationalism amongst the people spreading hatred for other nations and their people. The extremists also taught people about the need of unnecessary wars. Apart from this, people from countries like Croatia, Estonia, Bosnia, Latvia, Finland, Poland etc. wanted to gain freedom.

How and when did it start?

Who won and how did it end?

The allied powers which included Britain, France, Russia, Italy, Romania, Japan and USA won the World War 1. The war ended due to excessive killings, wastage of resources and Germany’s surrender. All the nations agreed to stop fighting signing treaties.