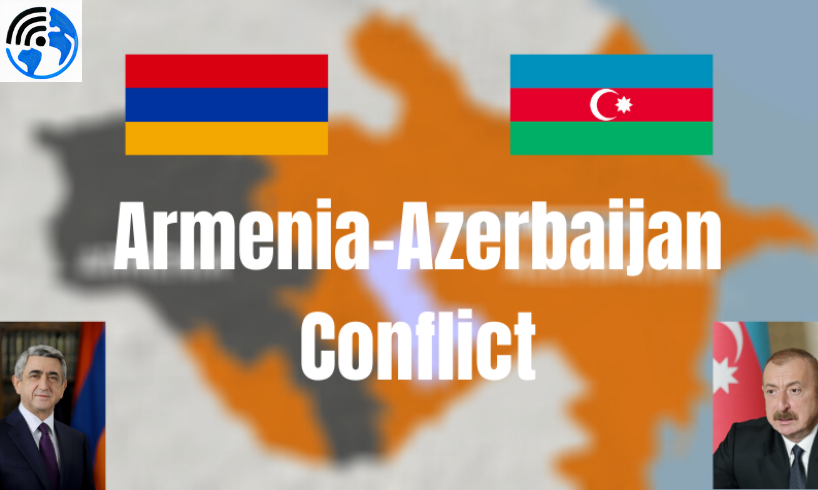 Armenia is a landlocked nation located in Asia spreaded across 29,743 square kilometres of area with a population of roughly 30 lakh individuals as of 2020. This is a Christian-majority country where 99% of the population practice Christianity (out of which majority are Apostolic Christians) where Muslims compromise of only 0.3%. It is to be noted that this country is secular by constitution.

Azerbaijan is a country located in Asia spreaded across 86,600 square kilometres of area with a population of roughly 99 lakh individuals as of 2020. This is a Muslim-majority country where 98% of the population practice Islam where Christians compromise of only 2%. It is to be noted that this country is secular by constitution.

Both the countries, Armenia and Azerbaijan border each other.

The border issues between these two countries have been active even before the formation of these countries. The dispute is all about the red-coloured part shown in the map above, which is called ‘Nagorno-Karabakh’ where Armenian Government claims this region to be a part of Armenia while Azerbaijan claims it to be an Azerbaijani territory.

This disputed territory is a mountaineous region spreaded across 11,458 square kilometres of area (the actual size of this region is debatable) which is quite remote. As of 2020, roughly about 75,000 individuals live this region while more than 1.47 lakh individuals used to reside here in 2013 but all had to flee to other regions due to border disputes. There is no official data of the demographs, but yes, we can say that 99% of the people here practice Christianity while the remaining 1% practice Islam.

In 1453, the land what we call it as ‘Armenia’ today was conquered by Ottoman Empire.

In 1502, ‘Greater Armenia’ region came under Safavid Persian rule. While, ‘Western Armenia’ remained the part of Ottoman Empire. It is to be noted that major part of Armenia was ruled by Ottomans only. There were some small dynasties existing too which took hold of small areas.

In 1578, Ottoman Empire conquered big part of Azerbaijan as well. This also led in bloodshed and violence as this rule was not accepted by many. While, it was under Safavid Empire before.

In 1603, Ottoman-Safavid War took place where Safavid won Azerbaijan’s land and took over it again.

In 1724, Ottoman Empire was back with more troops and conquered Azerbaijan again.

In 1914, World War-1 started exactly on July 28th. This war was bringing heavy losses to Ottoman Empire’s control and politics. A lot of resources were actually wasted in this war and many were killed. Due to dirty politics and weakening control, the right-wingers and terrorists caused the ‘Armenian Genocide’ where ethnic Armenians (especially Christians) were systematically murdered, deported and let to starve. The main motive behind this was to expand the control of Ottoman Empire and spread Turkish culture.

In 1918, Ottoman Empire lost control over Armenia and Azerbaijan. Then these became a part of a newly formed nation called ‘Transcaucasian Democratic Federative Republic’ on April 22. But, this newly formed nation lasted only for 34 or 35 days as it had a weak foundation, improper management and there were clashes among Georgia, Armenia and Azerbaijan. The state dissolved on May 26.

In May 1918, Tatars declared the land of Azerbaijan as an independent country with the name ‘Azerbaijan Democratic Republic’.

In June 1918, Armenia was declared as a separate nation for the first time where Mr. Hovhannes Kajaznuni (who was a member of ‘Armenian Revolutionary Federation’ party) became the first Prime Minister for it. Meanwhile, the Assembly declared this region as ‘self governing’ creating government. Though, we can see ‘Nagorno-Karabakh’ as a part of Armenia in the map. (Reference: NESL)

On Nov 11 1918, World War-1 ended causing a lot of destruction and economic setbacks. It took countless lives and damaged the political systems. This led a huge impact on Ottoman Empire where the locals also started to rebel. Meanwhile, ‘Georgian-Armenia War’ and Armenian-Azerbaijan War’ also took place.

In August 1920, Turkey tried to invade some parts of Armenia which led to conflicts and wars between the countries.

In November 1920, USSR went for a war against Armenia to capture the land. Being brutal, USSR successfully invaded the country. This invasion is known as ‘Red Army invasion of Armenia’.

In December 1920, ‘First Armenian Republic’ got dissolved forcibly and the land was then called ‘Armenian Soviet Socialist Republic’ as it became a constituent republic of USSR.

In 1936, Azerbaijan was forced to become a constituent republic of USSR too.

Since 1937, the land of Nagorno-Karabakh was declared as an autonomous region by the the Central Government in Moscow under USSR. Hence, the region neither belonged to Armenia nor Azerbaijan under the rule.

In 1987-1988, USSR was suffering from economic and political problems. The forces were getting weak too which confirmed the upcoming fall of the state. Before the collapse, USSR Government announced that Nagorno-Karabakh will be a part of Azerbaijan.

In 1988, a voting was held for the residents of Nagorno-Karabakh region to find out where they want to join. The voting results declared that the locals would prefer to join Armenia instead of Azerbaijan. This decision was not accepted Azerbaijan and USSR. Hence, this demand was opposed.

From October 1991, Just after independence, the countries were involved in conflict over Nagorno-Karabakh region. This conflict is still active.

On December 21, 1991, USSR collapsed due to various factors and political disbalance.

Since then, there has been plenty of wars, border disputes, increasing terrorism and economic issues between the countries. There are examples of ceasefire violations, killings, destruction and so on.

In May 1994, Russia mediated a ceasefire between Armenia and Azerbaijan to solve the dispute. In this, Armenia got almost full control over the disputed territorry which was not accepted by Azerbaijan. The fact is that Russia is in close relations with both the countries.

In 2016, the conflict was increased killing dozens of people. (Reference: BBC’s coverage)

In 2020, Armenia officially released a photo of a Christian priest holding The Holy Bible in one hand and a gun in another hand to know that the country is open for both peace and war. This came out to more of a violent sign which was not accepted by many countries. (Reference: MEMO report) Many people were killed in shooting and bombing from both the sides. Where, it is still unknown who started the war first.

Countries like Turkey, Pakistan, Iran, Israel and so on have stated to support Azerbaijan over this conflict.

Countries like India and United States of America are supporting Armenia.

It is interesting to know that the stand of Russia is still unclear.