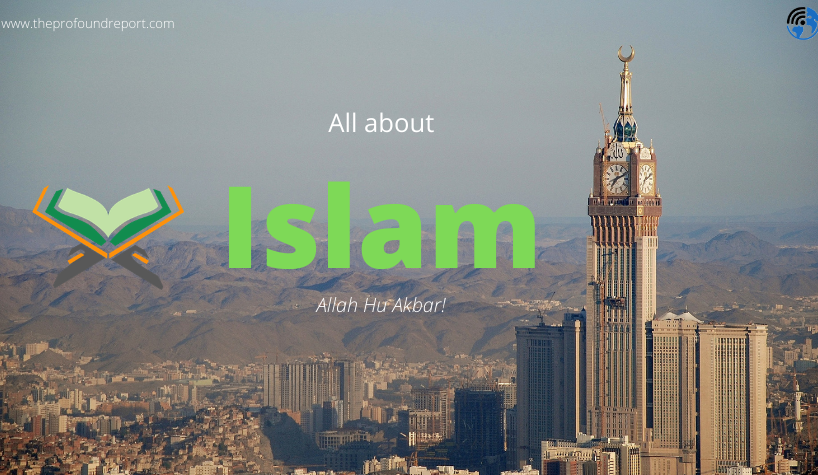 Islam is the second-largest religion of the world founded around 613 AD in Mecca, Saudi Arabia by Prophet Muhammad. It is an Abrahamic religion which promotes monotheism where Prophet Abraham is considered as the central prophet for the religion.

In 570 AD; Prophet Muhammad was born to Abdullah (his father) and Aminah (his mother) on April 22 in present-day Mecca, Saudi Arabia which was an important pilgrimage since then. His father died six months before he was born.

He was quite different as he was smarter than the other babies.

In 575 AD; Hazrat Aminah took Muhammad with him to Medina, Saudi Arabia accompanied by her Halima (a nurse) to stay at their relatives’ place and visit Abdullah’s grave.

On their way back, Hazrat Aminah fell ill and was not able to continue her journey back home. Unfortunately, she died and was then burried in the nearby village called Al Abwa’. Later, Halima (the nurse) went back to Mecca with the orphaned boy and placed him in protection of his grandfather, Abdul Al-Muttalib.

Muhammad was a really intelligent kid who loved to learn from others. He learned the skills of statesmanship from his grandfather who was a leader and a authoritive member of Mecca’s Council of Elders.

He was then passed into the care of his paternal uncle, Mr. Abu Talib who was a merchant.

Around 583 AD; Muhammad entered the teenage and started working as a sheperd. Apart from this, he used to travel with his uncle across present-day Saudi Arabia and Syria to help him with his work. He was really observant and understanding in nature who kept on learning from the surroundings and people. He and his uncle made their name in good books of other traders and merchants as they were found truthful and trustable.

Around 594 AD; he was about 24 year old man who gained success by becoming a wealthy merchant of Mecca and getting respect from other residents.

He met ‘Khadija bint Khawalayd’ who was a businesswoman during his business deal with her. Muhammad was responsible for carrying her goods to the northern regions and return with a profit. They had a successful business relation.

Around 595 AD; Khadija was impressed by Muhammad’s character and honesty. Hence, she gave a marriage proposal to him. It is to be noted that Muhammad was about 25 year old and Khadija was a 40 years old widowed woman. Muhammad, thinking with a broader perspective, did not hesitate and married her by breaking the taboos of the society.

After the marriage, he started managing business affairs of his wife. They were happily living their life.

Six children (2 boys and 4 girls) were born to them out of which both the boys died in infancy.

He became one of the most successful traders of the country and made Mecca one of the leading trade center.

Around 610 AD; The residents of Mecca started to become more materialistic as the the city was developed as a trade center where many businessmen were benefitted. Moreover, the people of Mecca and the entire present-day Saudi Arabia used to worship idols as a part of their tradition. Increasing materialism and idolism used to disturb the 40 year old Muhammad.

He started visiting ‘Jabal al-Nour’ (a mountain on outskirts of Mecca) regularly where he used to meditate and spend time alone. Due to his daily practice of meditation, the people around him witnessed transformations in him. After sometime, he was visited by an overpowering presence and saw Angel Gabriel which instructed to recite words of such beauty that he gradually attributed them to god. These experiences shook him very much.

In this year, he also visited Jerusalem, Israel in night to pray.

Around 613; About 3 years were passed and he witnessed the similar incidents again and again. Then, he revealed the messages he got to his tribe. These messages were gathered verse by verse which later became the holy scripture, Quran. Some of the residents became followers of the same.

As soon as the society got to know about Muhammad and some of his followers departing from the tribe’s traditions, they were not accepted, rather, they were percecuted and physically attacked. The most dominant tribe, Quraysh which also controlled the city and the Kaaba started to boycott trade from Muhammad and his followers. This led to economic disbalance in the tribe and famine began. Still, his wife, Khadija, always supported him.

Around the same year, he started to spread the messages of god he witnessed to all the people of Mecca in public.

Around 619 AD; His uncle, Abu Talib died at the age of 80. After a month, Khadija also died at the age of 64 due to sickness and weakness. This is why this year is known as ‘Year of Sorrow’ for him. He was really sad and couldn’t bear the loss. Finding him weaker, some leaders tried to assasionate him but god’s grace failed them.

Around 620 AD; he gained some support and made few hundred followers. At this time, he was given the title of ‘Prophet’ from those very first followers.

At the age of 50, he married to Sawda Bint Zama who was a 37 year old woman. She is often referred as ‘Mother of the Faithful’. It is to be noted that she was her second wife who was very helping in nature.

After successfully bringing peace to the society, he decided to live in Medina for about six years and he gathered more people towards Islam.

In 624 AD; the growing success of Prophet Muhammad and spread of Islam was not accepted by the Quraysh clan and the leaders of Mecca.

This hatred led to the first war against Muslims known as ‘Battle of Badr’ fought on March 13, 624 AD between Muslims and Quraysh clan in present-day town named Badr located in Saudi Arabia. It is a belief that about 1,000 angels were sent by the almighty god to win the war.

In 625 AD; ‘Battle of Uhud’ was fought on March 23, 625 AD in Uhud Mountain, Saudi Arabia between Qurayshi Meccans and Muslims where Qurayshi Meccans attacked first as they didn’t accept the fact of the new emerging religion, Islam.

In 627 AD; ‘Battle of the Trench’ was started in the month of March which was 27-days-long defence by Muslims of Medina from some Jewish tribes and traditional Arab tribes. Fortunately, the Muslims won the battle by the powerful defence.

In March 628; A treaty named ‘Treaty of Hudaybiyyah’ was signed between Muslims and other sides which recognised Islam as a new religion in the Arab world and gave freedom to Muslims to move throughout Arabia. The treaty also cleared that no war shall be held in future and Muslims will no longer be persecuted.

In 630 AD; Prophet Muhammad came back to his birthplace, Mecca and meet the people. He promoted peace and asked people to stop bloodshed in the name of religion. He started preaching and guiding the residents out there. He was actively engaged in social work.

Gradually, most of the residents of Mecca understood the zest of Islam and declared it as their religion too.

After sometime, he went to Medina again to preach and guide people.

In 632 AD; he returned to Mecca to perform pilgrimage by visiting holy sites like Kaaba while thousands of devotees followed him.

On March 19, ‘Event of Ghadir Khumm’ took place near Ghadir Khumm pond where he delivered sermon and blessed everyone.

After the pilgrimage, he returned to Medina and fell ill. It is really sad to learn that the illness took his life on June 8 and then he was offered heaven.

He was then burried in Al Masjid an Nabawi, Medina.

Some Facts about Islam